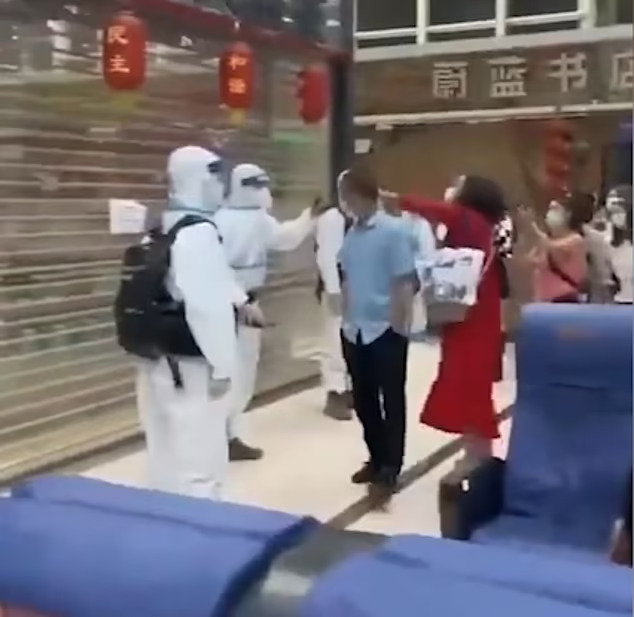 After just 61 new virus cases were reported in the province

Guards in hazmat gear were seen pointing machine guns at frightened families trapped inside a Chinese airport after the facility was placed on lockdown following a spike in Covid infections.

Video shows the officers, armed with guns and shields, pushing back the crowds of people who were forced to stay inside the Xishuangbanna airport in Yunnan on Wednesday.

Angry travellers were crying and screaming ‘are you gonna kill us all?’ at the guards after they were forcibly locked inside the terminal.

The lockdown came after 61 new coronavirus infections were reported in the Yunnan province earlier this week.

The move was an apparent attempt to halt virus spread as tensions rise ahead of the party congress later this month. President Xi Jinping is expected to secure a third term in power at the upcoming summit.

Mr Xi has made the ‘Covid Zero’ policy, which has left entire cities shutdown for months in an attempt to eradicate infections, a cornerstone of his leadership.

The airport lockdown came as China reported a total of 273 news Covid cases on Wednesday morning.

The virus flare ups were reported in 27 provinces, including Yunnan.

‘I spent 8,000 RMB (£995 pounds) for a two hour tour in Xishuangbanna airport. I am really speechless,’ one traveller posted to social media after their flight was grounded.

Many areas across the nation are stepping up virus precautions due to the recent outbreak, The Telegraph reported.

The airport in Urumqi, the capital of the Xinjiang region, cancelled 97 per cent of departing flights and 95 per cent of arriving flights on Wednesday.

All outbound trains and buses were also suspended until further notice.

The travel halts came as the region, which is home to 22 million people, reported 38 new asymptomatic cases on Tuesday.

Residents were banned from leaving the region and analysts speculate that hundreds of locals who travelled for the Chinese National Day holiday may be stranded by the new restrictions.

In July 2021, Judge Andrew Hanenn of the Southern District of Texas ruled that the Deferred Action for Childhood Arrivals (DACA) program was unlawful, blocking the government from approving new applications.

The DACA program provides deportation protection and work permits to the almost 600,000  “Dreamers” currently in the U.S.  Current DACA recipients can renew their status but new applicants will be blocked.

A “Dreamer” is a leftist term that refers to a person who has lived in the US without official authorization since coming to the country as a minor.

Barrack Obama created DACA in 2012 in an Executive Order to shield those brought to the U.S. illegally as children from deportation.  This was after Obama repeatedly said he did not have the authority of executive amnesty.

DACA allows “Dreamers”  to legally work and live in the U.S. without fear of deportation but does not qualify them for permanent legal status or citizenship.

The ruling is a response to a lawsuit filed in 2018 by Texas Attorney General Ken Paxton on behalf of seven states arguing DACA was an overreach of the federal government’s immigration powers.