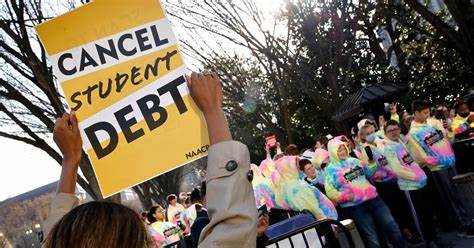 A federal appeals court on Friday temporarily halted Biden’s signature student loan forgiveness program, which would forgive up to $20,000 in student loan debt for tens of millions of borrowers.

The court’s action has already started to sow confusion and concern. Here’s what student loan borrowers need to know.

The 8th Circuit Court of Appeals blocked implementation of Biden’s student loan forgiveness plan upon the emergency request of a coalition of Republican-led states. These states had sued the Biden administration in federal district court in Missouri, arguing that Biden’s plan would lead to lost revenue and other financial harms for states and their state-affiliated FFELP lenders and servicers, such as MOHELA. The federal district court judge dismissed the lawsuit, but the states then appealed to the 8th Circuit.

The 8th Circuit granted the states’ request for an emergency temporary “stay” while the parties prepare their legal arguments regarding a potentially more serious stay, called an injunction. An injunction can block a challenged rule, law, or program for the duration of a legal battle, which can last months or even years. An injunction poses a potential danger to Biden’s student loan forgiveness program, but the court won’t rule on that for at least several more days.

In the meantime, this current block on the program is a temporary, administrative pause.

“The [8th Circuit’s] order does not reverse the trial court’s dismissal of the case, or suggest that the case has merit,” said the White House in a statement on Friday night. “It merely prevents [student] debt from being discharged until the court makes a decision” on the preliminary injunction.

The Stay Only Impacts Biden’s One-Time Student Loan Forgiveness Initiative, Not PSLF or Other Programs

The temporary stay has no impact on other federal student loan forgiveness programs, including Public Service Loan Forgiveness (PSLF) or the Limited PSLF Waiver initiative, which is set to end on October 31.

“As a result of a court order, we are temporarily blocked from processing debt discharges,” reads a message on the student loan forgiveness application website. “We encourage you to apply if you are eligible. We will continue to review applications. We will quickly process discharges when we are able to do so.”

The “temporary decision does not stop the Biden Administration’s efforts to provide borrowers the opportunity to apply for debt relief,” said Education Secretary Miguel Cardona in a tweet late Friday. “Amidst Republicans’ efforts to block our debt relief program, we are moving full speed ahead to be ready to deliver relief to borrowers who need the help.”

The Biden administration indicated yesterday that 22 million borrowers have already submitted the student loan forgiveness application. This is more than half of estimated eligible borrowers.

Secretary Cardona confirmed on Friday that these borrowers who have already applied need not worry. The court’s action “does [not] prevent us from reviewing the millions of applications we have received,” he said.

“You will not need to reapply” if you have already submitted a student loan forgiveness application, according to the Education Department’s online application portal.

Three weeks ago, the Biden administration updated the eligibility guidance for the student loan forgiveness plan to exclude commercially-held FFELP loans from relief.

Chinese President Xi Jinping locked in support for a historic third term in power at the Communist Party’s Congress on Saturday, but the dramatic removal of his predecessor from the event stole the headlines.

At the end of the week-long gathering in Beijing, China’s ruling party approved a sweeping reshuffle that saw a number of top officials — including Premier Li Keqiang — step down, allowing Xi to appoint new allies.

The largely rubber-stamp meeting of around 2,300 party delegates was meticulously choreographed, with Xi determined to avoid any surprises as he enshrined his leadership for the next five years.

However, in an unexpected move that punctured the proceedings at the Great Hall of the People, former leader Hu Jintao was led out of the closing ceremony.

The frail-looking 79-year-old seemed reluctant to leave the front row where he was sitting next to Xi.

No official explanation was given and AFP did not receive any response from Chinese authorities on the incident.

Delegates then approved a call obliging all party members to “uphold Comrade Xi Jinping’s core position on the Party Central Committee and in the Party as a whole”, according to a unanimously passed resolution on changes to the party charter.

Xi is now all but certain to be unveiled as general secretary on Sunday, shortly after the first meeting of the new Central Committee.

This will allow Xi to sail through to a third term as China’s president, due to be announced during the government’s annual legislative sessions in March.

ROME—Giorgia Meloni was sworn in as Italy’s prime minister on Saturday, assuming power at the helm of a right-wing coalition beset by internal squabbles over Rome’s position toward Moscow.

A staunch Atlanticist, Ms. Meloni has said her government will be steadfast in its support for Ukraine and in its opposition to Russia’s war on the country.

But cracks in her right-wing alliance began to appear even before her government was sworn in, when former premier Silvio Berlusconi, a junior coalition member, was recorded defending Russian President Vladimir Putin’s invasion of Ukraine. In response, Ms. Meloni said adherence to a pro-Western foreign policy was a requirement for belonging to her government.

As prime minister, she will have to tackle the urgent issue of high energy prices as winter sets in and households and businesses struggle with high heating bills. Another big challenge will be managing her unruly coalition allies, some of whom have blamed sanctions on Russia for Italy’s energy-price woes.

The 45-year-old Roman has sought to reposition herself as a mainstream conservative, playing down her far-right populist roots. Her Brothers of Italy party descends from a movement founded by former fascists after World War II, and its supporters and members include some admirers of Italy’s former fascist dictator Benito Mussolini.

Ms. Meloni has denounced fascism and toned down her criticism of the European Union. She maintains a hard-line position on identity issues such as immigration and gay rights.

In recent months, she has worked hard to reassure Italy’s European allies and financial markets that her government won’t be a destabilizing force in the bloc. She has embraced pro-business economic policies such as lower taxes but also vowed to keep Italy’s massive public debt in check. Her government is expected to work closely with the EU to tackle the energy crisis, confront Russia and secure continued funding from the bloc.

Lara Logan Banned from Newsmax for Arguing Good Defeats Evil, Satan Will Not Win, Globalists Want Us Eating Bugs While They Dine on Blood of Children (VIDEO)

The man now widely believed to be Peng Lifa reportedly disguised himself as a construction worker to get atop Beijing’s Sitong Bridge and hang up two banners — one reading, “No PCR tests, but food; no lockdowns, but freedom; no lies, but respect; no Cultural Revolution, but reform; no dictator, but vote; no [to being] slaves, but we the people” and another reading “students strike — workers strike — people strike — dictator traitor Xi Jinping.”

The reference to “slaves” appears to be intentionally similar to the first line of the Chinese national anthem, the “March of the Volunteers”: “Stand up! Those who refuse to be slaves!” Chinese authorities have censored lines from the country’s national anthem online in the past when citizens have weaponized it to protest the seven-decade-old communist regime.

Peng also reportedly set a small fire on the bridge so passersby would be more likely to look at the banners and shouted anti-Xi slogans through a megaphone before police arrived on the scene, disappeared him from sight, and took down the banners, dispersing the crowds below.

The act of brazen defiance, in the heart of the Chinese elite’s seat of power, was particularly impactful as it occurred shortly before the beginning of the Chinese Communist Party Congress, which takes place every five years and determines the leadership and priorities of the Party.

Attempts to censor the Beijing bridge banners have largely failed, “and other protest signs have since appeared,” Voice of America reported on Thursday. “Due to the dense coverage of surveillance cameras in China, however, most of them have been found in public bathrooms and locations without closed-circuit TV monitoring.”

At least one high-profile arrest has occurred in response to Peng’s messaging. Radio Free Asia (RFA) reported on Monday that a retired teacher identified as Gu Guoping was arrested and held incommunicado for sharing photos and other content related to Peng’s protest, helping spread the message faster that Party censors could mute it. He also reportedly shared some of the images of the bathroom stall graffiti, which were reproduced following their censorship in China by dissidents abroad.

The dissident site China Change, which offered some of the known biographical details regarding Peng, also reported that some have suggested that over half a million accounts on the Chinese communication application WeChat have been blocked for sharing the Peng protest.