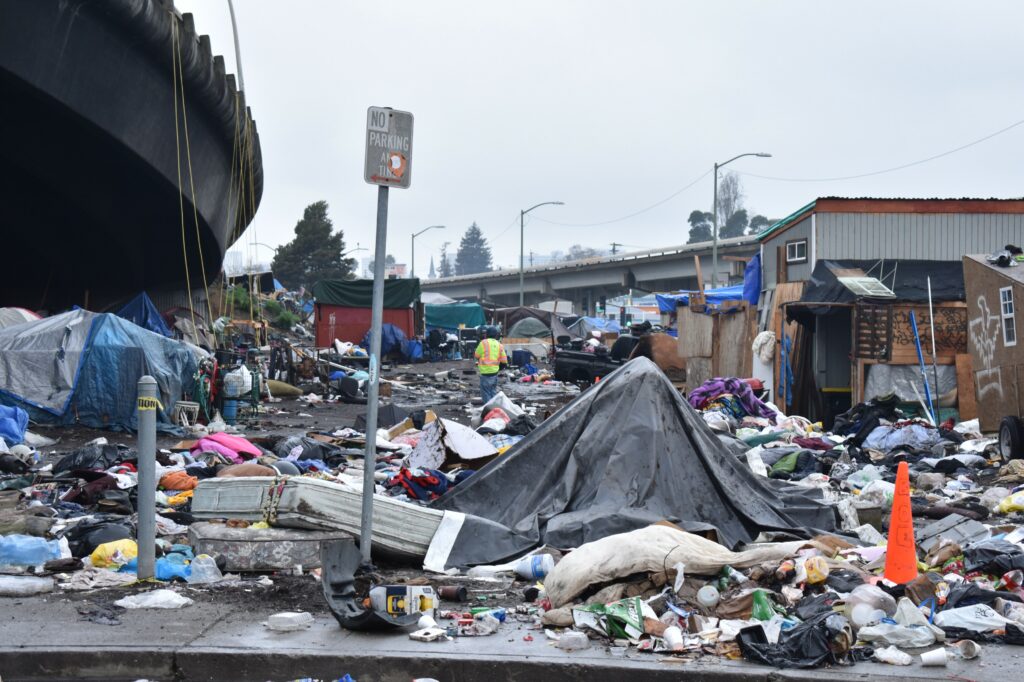 As we draw closer to polling day, there is really only one question anyone needs to have in their head. Are things better or worse than when America last went to the polls?

The problem is that you can answer that differently state by state. A lot of people who fled California in the last couple of years, for instance, can say that their lives have improved by moving to Tennessee, Florida or Texas.

So let me narrow the question down a bit. Can anybody in any Democratic-run city honestly say that their lives — and city — have improved over the last couple of years?

I dare even the most die-hard, dyed-in-the-wool Democrat to say, “Oh, New York has never been better. In fact, it’s just getting better and better.” Does anyone really believe that? Is there a single person out there who can really say that with a straight face? As they survey the crime in our city, the homelessness, the waste and rats. And I’m not even talking about the incumbents of City Hall. Does anyone think that this great city has become greater in the last two years?

Of course, most of us are lucky enough not to get shot. So it’s easy for some people to be lax in their judgments. But the same figures exist in almost every other area of crime. A 41% increase in grand larceny. A 37% increase in robberies. A 26% rise in burglaries. All just in the course of a year.

Though it’s not as if you need the statistics to tell you that. Walk almost anywhere in our city and you can see it for yourselves. There is the homelessness, the people shooting up in the street, the clearly insane people shouting around on the streets. Of course, it’s worse in the outer boroughs. But it is just as clear in the center of the city, too. A couple of weeks ago I was proudly showing some out-of-towners the delights of Midtown when we walked out of the building to find a homeless man shooting up in the street with a needle and then howling down the street as mothers and children hurried by.

Democrats pretend that this is a nationwide problem. But it isn’t. It’s a Democratic-run city problem. Occasionally Democrats like to play a nasty little game on this serious issue. They pretend, for instance, that crime stats like those to do with shootings are the same in red states and blue states. What they fail to note is that it is blue cities that are the problem. Even if they are in red states.

For instance, if you go down to Austin, Texas, you will find a city that is booming, for sure. But you will also find all of the same problems you find in New York. You will see all the same homelessness, the drug addiction, violence and lawlessness.

That is what is so strange about the experiment that Gavin Newsom and other Democrats have played on this country in recent years. It doesn’t matter whether it is San Francisco, New York, Austin or indeed the nation’s capital. Look at the state of Washington, DC, these days, with its homeless encampments greeting you from the moment you leave Union Station. You don’t have to wonder about the politics of the people who run this city. Of course, the Council of the District of Columbia is Democratic-majority. Because they have the same problems that every other Democratic city has.

By now you would have thought that people would be onto this. After all, everywhere they get into power the Democrats try the same tricks: bail and other criminal-justice “reforms,” attacks on the ability of police officers to do their jobs and much, much more. The results are there for everyone to see. Have the policies worked anywhere? No. But still the Democrats keep putting them in place wherever they can.

Indeed that is Newsom’s main achievement. He rolled out a set of policies that further wrecked San Francisco while he was mayor. As governor, he rolled out the same policies — with the same disastrous effects — across California. If he ever makes it to the White House, as he and much of his party hope he will, he’ll try to roll this out across the country.

NBC News mysteriously PULLS its exclusive report on how Nancy Pelosi’s husband Paul, 82, calmly opened door to cops in his underpants – and then walked TOWARDS ‘hammer intruder’ who bludgeoned him

NBC News has pulled a bombshell report that claimed Paul Pelosi did not tell responding police officers that he was in danger just before he was injured in a hammer attack at his San Francisco home last week.

The clip posted by the media outlet early Friday morning cited sources close to the investigation that claimed the husband of US House Speaker Nancy Pelosi did not declare an emergency or say he was in distress when cops showed up at his door in response to his 911 call.

The report by Emmy Award-winning journalist Miguel Almaguer claimed the 82-year-old walked back a few feet away from the officers and into the foyer toward David DePape, 42, who had earlier broken into the home armed with a hammer.

As Pelosi reportedly took steps away from the responding officers and in the direction of DePape, they saw him bludgeon Pelosi with the hammer, the report claimed.

The NBC News report also stated that it was not clear what Pelosi’s mental status was when he reportedly stepped back away from police and that responding officers were seemingly unaware that it was the home of Nancy Pelosi, who has a security detail and was in Washington, D.C. at the time of the attack.

The report, which differs from the court documents filed earlier this week, was published Friday morning.

By early afternoon, according to the New York Post, the report had been pulled with the explanation: ‘The NBC report from Friday was taken down with the explanation, ‘The piece should not have aired because it did not meet NBC News reporting standards.’

How the government hid the truth behind Hunter Biden’s laptop

The more we find out about the collusion that has been going on among the Biden administration, the security agencies and Big Tech, the more alarming it is — and the more unrepentant they are.

The latest bombshell from the Intercept, based on communications unveiled in the federal lawsuit Missouri v. Biden, shows that the Department of Homeland Security has been having monthly meetings with Facebook and Twitter to pressure them to censor social media posts about topics such as the botched withdrawal from Afghanistan, the origins of COVID-19, the efficacy of COVID vaccines, racial justice and US support for the war in Ukraine — in other words, anything that could be detrimental to public support for the Biden administration.

We already know that the FBI was involved in efforts to censor and bury information that might have harmed Joe Biden’s candidacy back in 2020, including The Post’s exclusive about Hunter Biden’s laptop in October 2020. That amounted to election interference, which prevented the American people from doing the necessary due diligence on one of the two candidates for president. So successful was the strategy that the Biden administration appears to have expanded it.