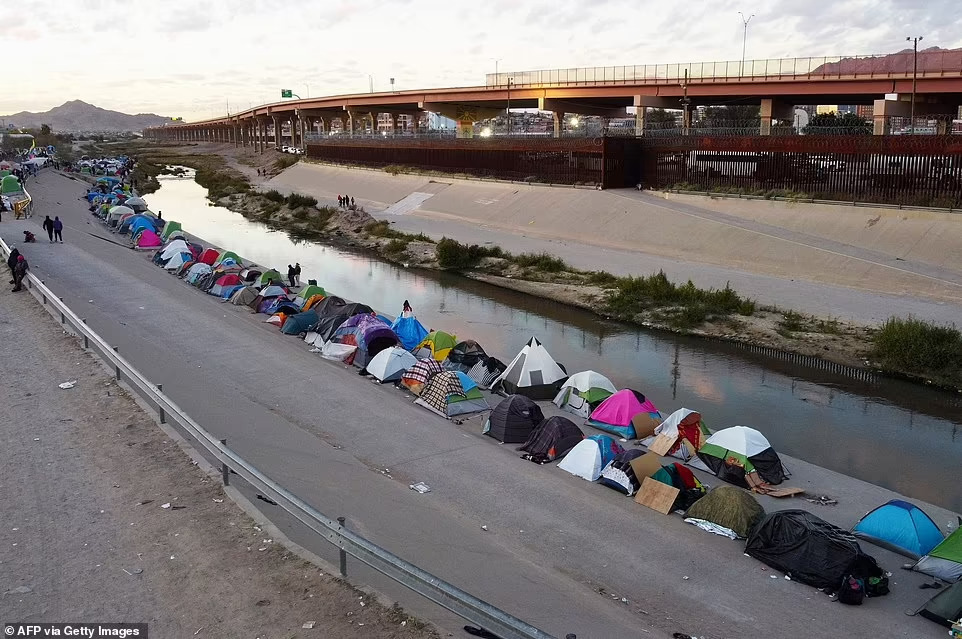 Texas Governor Abbott tells Biden – if you don’t enforce border laws, I will: Republican invokes invasion clause to send GUNBOATS to the border, build a wall, work with foreign countries on security and designate cartels as terrorists

Texas Governor Greg Abbott invoked a Constitutional clause on Wednesday warning President Joe Biden that the Lone Star state would go rogue to defend itself from what he calls a migrant ‘invasion’ at the southern border.

The Republican leader said he’d use the clause and sign executive orders on deploying armed boats along the border, constructing a wall, and working with foreign governments on Texas’ security – among other controversial points.

The clause, found in Article I Section 10 of the Constitution, forbids individual states from unilateral military action ‘unless actually invaded, or in such imminent Danger as will not admit of delay.’

A record surge in asylum-seekers attempting to cross into the US through Mexico under the last two years of Biden’s term has strained the US federal immigration system, while communities at the border buckle under the influx and shelters are overwhelmed.

Republicans have blamed the president for rolling back controversial Trump-era immigration policies, and Washington’s delay in passing comprehensive immigration reform has only led to more gridlock between red border state governments, the leaders of some Democrat-run cities and the White House.

Abbott took it a step further on Wednesday with a letter to Biden telling him that ‘Texans are paying the price for your failure’ at the border and the Democrat’s policies have led to ‘catastrophic consequences.’

The United States shall guarantee to every State in this Union a Republican Form of Government, and shall protect each of them against Invasion; and on Application of the Legislature, or of the Executive (when the Legislature can-not be convened) against domestic Violence.

President Joe Biden is “highly compromised” by the Chinese government, according to Sen. Ron Johnson (R-WI) who argued that that must be the case given the scrapping of the United States Justice Department’s effort to combat Chinese economic espionage.

“It’s hard to say. We’ll get some kind of readout from it. But again, I just — my feeling is that Joe Biden is highly compromised,” he insisted. “Why else would we cancel the China Initiative — the DOJ program designed to investigate China’s theft of our intellectual property from colleges and universities?”

“It made no sense whatsoever,” he added. “There’s only one explanation: Joe Biden is compromised.”

The Biden Justice Department announced in February that it would be ending the China Initiative, which aimed at Chinese espionage and intellectual property theft, over concerns it created a perception of racism despite an internal review finding no indication of racial bias or prejudice.

The CCP has stolen trillions of dollars of American intellectual property, destroyed millions of American jobs, and turned students and researchers studying in the United States into foreign spies. Yet today, the Biden administration announced it’s canceling the initiative tasked with combating the Chinese government’s unprecedented domestic sabotage and aggression because they claim it’s racist. Canceling this initiative is just another instance of weakness from an administration more concerned with being politically correct than protecting Americans. And you can be sure our adversaries are watching.

The effort was initially launched by the Trump administration in 2018 in order to counter Chinese espionage efforts that included paying professors at American universities for access to research funded by U.S. government grants.

Meeting with Xi on Monday, Biden suggested China and America should work together on “climate changes” and “food insecurity,” without addressing human rights issues and the genocide of Muslim-majority people in East Turkistan in particular, which has resulted in the construction of over a thousand concentration camps, rampant killing, gang rape, and forced sterilization.