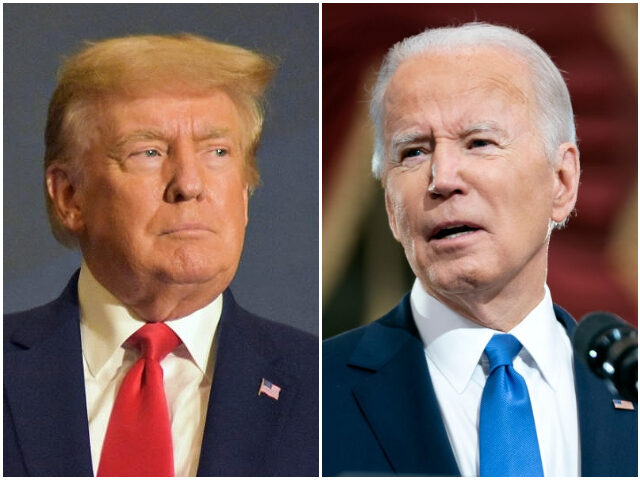 Trump defies Republican critics by officially announcing he IS running for president in 2024 for the third time in front of Melania and Barron – and says U.S. ‘can’t take four more years’ of Biden and the Democrats

Donald Trump has officially announced he is running for president for the third time in 2024 in a speech attacking President Biden, the ‘radical left’ Democrats and their record on the economy and the world stage in the two years since he left office.

The former president ignored Republican critics and those who blamed him for the GOP‘s disappointing midterms to go full steam on stating his intent to be back in the Oval Office to ‘drain the swamp’ with the country ‘being destroyed before our very lives’.

‘In order to make America great and glorious again, I am today announcing my candidacy for president of the United States,’ he confirmed to huge cheers before laying into the FBI raid, the ‘fake’ dossier’, the ‘deep state’ and lobbyists.

Despite not formally making his announcement until later in the speech, Trump made his intentions clear from the outset by telling his audience: ‘America’s comeback starts right now.’

‘Three years ago when I left office, the United States stood ready for its golden age. Our nation was at the pinnacle of power, prosperity and prestige – towering above all rivals vanquishing all enemies and striding into the future confident, resourceful,’ Trump said.

He vowed to make his run about working people, restoring American energy independence, reforming elections to make sure there are ‘only paper ballots’ and restoring an ‘agenda of greatness’ with top Republicans and the media saying he should stay out of the race.

Trump peppered his speech with various campaign promises, some of which are similar to statements he’s made in campaign-style rallies this year. He said he would hand the death penalty to drug dealers, ban transgender women from playing female sports, plant an American flag on Mars, build a nuclear ‘missile shield’, and rehire service members who were fired for being unvaccinated.

‘This will not be my campaign. This will be our campaign all together. Because the only force strong enough to defeat the massive corruption we are up against is you, the American people,’ he said while celebrating the last six years of the MAGA movement, his midterm endorsements and his battle against Washington.

After months of speculation and with mounting legal battles, he filed paperwork with the Federal Election Commission just moments before he began his speech to fired-up supporters at Mar-a-Lago where he said America ‘can’t take’ four more years of Biden.

‘The decline of America is being forced upon us by Biden and the radical left lunatics running our government right into the ground,’ Trump said.

In his stately ballroom with opulent gold trimmings and chandeliers, he was introduced as the ‘next president’ to chants of ‘USA’.

Speaking for just over an hour, Trump made defiant and sometimes somber remarks about the state of the country, hours after Mitch McConnell said independent voters  had the ‘impression of many of the people in our party and leadership roles is that they are involved in chaos’.

The former president went on to attack Biden for record inflation, ‘falling asleep at global conferences’ and making the U.S. ‘detestable’ with the rest of the world. He celebrated Nancy Pelosi getting ‘fired’ with Republicans on the cusp of taking the House majority.

But taking a page out of his White House successor’s 2020 playbook, Trump vowed to ‘unify people’ and claimed he did so during his last term.

‘It happened in the previous administration,’ Trump said. ‘And what was bringing them together was success.’

The crowd roared when he and Melania Trump arrived to the tune of his signature theme, Lee Greenwood’s God Bless The USA.

Ron DeSantis Responds to Question About Trump: ‘Incoming Fire’ Is ‘Just the Nature’ of the Job

Florida Gov. Ron DeSantis (R) responded to questions regarding former President Trump — from the president’s forthcoming announcement to his recent “attacks” of the governor — but DeSantis kept his nose clean, refusing to criticize the president and instead taking aim at the establishment media and woke corporations while dismissing everything else as “just noise.”

DeSantis was asked about Trump’s announcements and what one questioner described as the former president’s “less than flattering” remarks about him. The governor, however, simply explained that “incoming fire” is just the nature of the job.

“One of the things I’ve learned like and learned in this job is when you’re doing, when you’re leading, when you’re getting things done, you take incoming fire, that’s just the nature of it,” he began, before turning to the corporate media’s issues with his leadership.

“I roll out of bed in the morning, I’ve got corporate media outlets that have a spasm — just the fact that I’m getting up in the morning and it’s constantly attacking. And this is just what’s happened. I don’t think any governor got attacked, more particularly, by corporate media than me over my four year term,” DeSantis said, explaining that one learns that it is all “just noise.”

“And really what matters is are you leading? Are you getting in front of issues? Are you delivering results for people? Are you standing up for folks? And if you do that, then none of that stuff matters,” DeSantis said. “And that’s what we’ve done. We focused on results and leadership.”

The governor added that people should check the “scoreboard” from last Tuesday, deeming it “the greatest Republican victory in the history of the state of Florida.”

“And it wasn’t just the best governor victory, of course, it was that, but we swept in. We swept in super majorities in the Florida Legislature. We have 85 Republicans out of 120 in our state house, we’ve never had that many before,” he said, further detailing the Sunshine State’s victories.

“We have 28 senators out of 40 that are Republicans — never had that many,” he said, also pointing to school board victories as well as congressional victories, going from 16 Republican members of the U.S. House from Florida to 20.

“At the end of the day, I think people respond to the leadership. They respond to the results, and so that’s why — even though I know anytime I do anything, you’re over the target, you know, you’re gonna face incoming — that’s just the nature of it,” he continued.

Bye-Bye Pelosi! Republicans Secure the Majority in the House of Representatives

The Republicans won a majority in the House of Representatives.

The GOP finally hit the magic number: 218 seats in the US House.

14 races are still outstanding so the final count for the 118th Congress is still unclear.

The Republicans took control of the House after Kevin Kiley was declared the winner in California’s 3rd Congressional District.