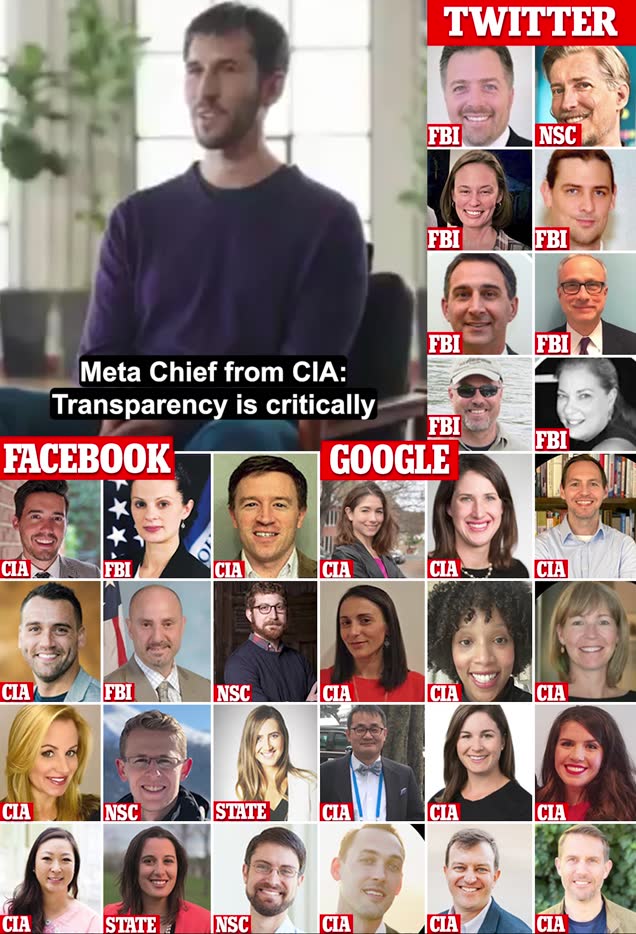 A large number of ex-officers from the FBI, CIA, NSC, and State Department have taken positions at Facebook, Twitter, and Google.

The revelation comes amid fears the FBI operated control over Twitter censorship and the Hunter Biden laptop story.

The Twitter files have revealed the close relationship with the FBI, how the Bureau regularly demanded accounts and tweets be banned and suspicious contact before the Hunter laptop story was censored.

The documents detailed how so many former FBI agents joined Twitter’s ranks over the past few years that they created their own private Slack channel.

A report by Mint Press’ Alan MacLeod identified dozens of Twitter employees, who had previously held positions at the Bureau, by tracking down their LinkedIn profiles

He also found that former CIA agents made up some of the top ranks in almost every politically-sensitive department at Meta, the parent company of Facebook, Instagram, and WhatsApp.

And in another report, MacLeod detailed the extent to which former CIA agents started working at Google.

It remains unclear whether any of these former agents have worked with their previous employers in a coordinated effort to quash any stories.

But the CIA is prohibited under federal law from ‘engaging in any activities for purposes of affecting or interfering with the domestic political process.’

DailyMail.com has now been able to track down nine former CIA agents who are working, or have worked, at Meta, including Aaron Berman, the senior policy manager for misinformation at the company who had previously written the president’s daily briefings.

Six others have worked for other intelligence agencies before joining the social media giant, many of whom have posted recently about Facebook’s efforts to tamp down on so-called ‘covert influence operations.’

David Agranovich, a former intelligence officer at the National Security Office serving at the White House, even seemed to have dismissed the Twitter Files, which have been released over the past few weeks and show an apparently coordinated effort to quash certain stories.

Meanwhile, at Twitter, DailyMail.com was able to find eight former FBI agents working in divisions of ‘trust’ and ‘security,’ as well as one man who had allegedly worked ‘psychological operations’ at the National Security Council.’

Others, though, like Kristie Canegallo, Google’s former vice president of trust and safety have gone from their jobs at Big Tech companies to serving in intelligence organizations. Canegallo is now the chief of staff for the Department of Homeland Security.

The far-left networks MSNBC and CNN have ignored revelations from the “Twitter Files” about the FBI colluding with Twitter employees to protect the Biden campaign from the damning “Laptop from Hell” story.

The networks, which have pushed conspiracy theories about the laptop being Russian disinformation, have ignored Monday’s release of the files that exposed the FBI and intelligence community’s role in censoring the “Laptop from Hell” story first reported in 2020 by Breitbart News’s Emma-Jo Morris.

According to a TVEyes software search, CNN and MSNBC have not mentioned the “Twitter Files” one time in the past two days.

Journalist Michael Shellenberger reported Monday how the FBI and intelligence community “discredited factual information about Hunter Biden’s foreign business dealings both after and *before* The New York Post revealed the contents of his laptop on October 14, 2020.”

Shellenberger cited Breitbart News’ senior contributor Peter Schweizer’s research from his books, Secret Empires and Profiles in Corruption, which detail how the Biden family business earned tens of millions of dollars from foreign business deals for which “Hunter offered no real work.”

CNN and MSNBC’s decision to ignore one of the biggest stories of 2022 appears to be a coordinated effort to tamp down publicity information about the Biden Crime Family.

The establishment media’s lack of reporting on the files has also been joined by false reporting about the scandal. Bloomberg’s Jennifer Jacobs has claimed the “Twitter Files” “broke little ground” on a laptop “purportedly owned by Hunter Biden.”

While reporting on the files, the New York Times’ Michael M. Grynbaum falsely stated Hunter’s laptop was “stolen,” when the laptop was actually abandoned by Hunter at the computer repair shop:

Mr. Musk and Mr. Taibbi framed the exchanges as evidence of rank censorship and pernicious influence by liberals. Many others — even some ardent Twitter critics — were less impressed, saying the exchanges merely showed a group of executives earnestly debating how to deal with an unconfirmed news report that was based on information from a stolen laptop.

Michael Tomasky published an article in the New Republic claiming the files were a minor development, calling it “the president’s son’s junk” and a Republican “obsession.”

According to a recent survey, 71 percent of Americans believe accurate reporting of Hunter’s “Laptop from Hell” could have altered the 2020 presidential election.

In 2018 and 2020, Breitbart Senior Contributor and Government Accountability Institute President Peter Schweizer published Secret Empires and Profiles in Corruption. Each book hit #1 on the New York Times bestseller list and exposed how Hunter Biden and Joe Biden flew aboard Air Force Two in 2013 to China before Hunter’s firm inked a $1.5 billion deal with a subsidiary of the Chinese government’s Bank of China less than two weeks after the trip. Schweizer’s work also uncovered the Biden family’s other vast and lucrative foreign deals and cronyism.

Breitbart Political Editor Emma-Jo Morris’s investigative work at the New York Post on the Hunter Biden “laptop from hell” also captured international headlines when she, along with Miranda Devine, revealed that Joe Biden was intimately involved in Hunter’s businesses, appearing to even have a 10 percent stake in a company the scion formed with officials at the highest levels of the Chinese Communist Party.

Hunter Biden is the subject of a narrative film My Son Hunter, marking Breitbart’s expansion into film distribution. The film was produced by the Unreported Story Society. It’s the story the establishment media don’t want you to see. The film is available RIGHT NOW for Streaming and Downloading at MySonHunter.com.

Oscar-winning actor and one of Hollywood’s most progressive voices Tim Robbins, revealed he now regrets complying with the government’s Orwellian COVID mandates, which he says transformed him into a “tribal, angry, vindictive” towards the unvaccinated.

On Sunday’s episode of British comedian Russell Brand’s podcast, Robbins explained his journey from being a sheep with the government’s unconstitutional mandate early in the pandemic to someone who questions the government’s agenda built around COVID-19, vaccination, lockdowns, and masking, Blaze reported.

“I bought into it… And I was masking everywhere. I was keeping my social distance so as adhering to the requests made of me. And I felt angry at people that didn’t do that. I felt angry,” Robbins said.

The trip to the UK finally made Robbins realize that he was wrong to believe the narrative of the pandemic without questioning it.

“It wasn’t until I came to the UK in January of 2021 that I started to have questions… I noticed a lot of people were not adhering again to these requests made by their government. And I thought, well, they’re going to have a hard day coming up, you know, that there will be some serious death here. And I kept my mask on and I kept adhering to the policies. But it wasn’t until much later that I started to have questions.”

“When I saw that there wasn’t a huge death rate in [Britain] after I had witnessed personally what it was happening, I started to wonder more and more about what we were being told and whether it was true or not. And so it took a while for me to speak about it,” he continued.