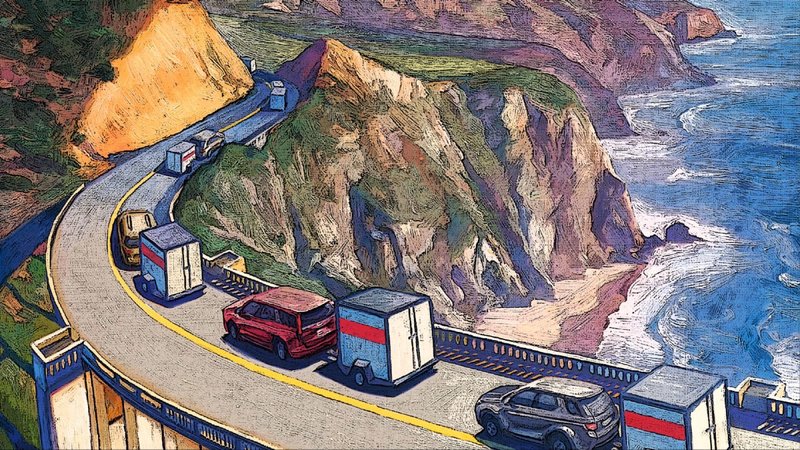 The U.S. Census Bureau reported Thursday that 300,000 people left California in 2022, more than left any other state, amid a general slow increase in the U.S. population as the country recovered from COVID-19.

It was the third consecutive annual decline for California, the Sacramento Bee noted, though births outnumbered deaths.

The U.S. population grew by about 1.3 million people, thanks largely to the arrival of over 1 million migrants:

Net international migration — the number of people moving in and out of the country — added 1,010,923 people between 2021 and 2022 and was the primary driver of growth. This represents 168.8% growth over 2021 totals of 376,029 – an indication that migration patterns are returning to pre-pandemic levels. Positive natural change (births minus deaths) increased the population by 245,080.

Internally, the South grew the most, thanks to migration from other states, with Florida growing the fastest, followed by Texas and North Carolina. (California, New York, and Illinois lost the most residents.) The Northeast and Midwest lost residents, thanks to outward migration, and the West gained residents, largely through natural growth (births) — overcoming the drag of California’s net losses.

Your iPhone’s analytics data includes an ID number tied to your name, email, and phone number, say researchers who uncovered other holes in Apple’ promises.

A new test of how Apple gathers usage data from iPhones has found that the company collects personally identifiable information while explicitly promising not to.

The privacy policy governing Apple’s device analytics says the “none of the collected information identifies you personally.” But an analysis of the data sent to Apple shows it includes a permanent, unchangeable ID number called a Directory Services Identifier, or DSID, according to researchers from the software company Mysk. Apple collects that same ID number along with information for your Apple ID, which means the DSID is directly tied to your full name, phone number, birth date, email address and more, according to Mysk’s tests.

According to Apple’s analytics policy, “Personal data is either not logged at all, is subject to privacy preserving techniques such as differential privacy, or is removed from any reports before they’re sent to Apple.” But Mysk’s tests show that show that the DSID, which is directly tied to your name, is sent to Apple in the same packet as all the other analytics information.

“Knowing the DSID is like knowing your name. It’s one-to-one to your identity,” said Tommy Mysk, an app developer and security researcher, who ran the test along with his partner Talal Haj Bakry. “All these detailed analytics are going to be linked directly to you. And that’s a problem, because there’s no way to switch it off.”

The findings worsen recent discoveries about Apple’s privacy problems and promises. Earlier this month, Mysk discovered that Apple collects analytics information even when you switch off an iPhone setting called “Share iPhone Analytics,” an action that Apple pledges will “disable the sharing of Device Analytics altogether.” Days after Gizmodo reported on Mysk’s tests, a class action lawsuit was filed against Apple for allegedly deceiving its customers over the issue.

The Internal Revenue Service on Friday announced they are delaying new tax-reporting requirements for millions of Americans who made more than $600 of income from e-commerce platforms such as Ebay, Etsy and AirBnB.

The one-year reprieve means that said e-commerce platforms will not give the tax agency information on users whose income exceeds the $600 level, nor will they be required to provide sellers with a blizzard of 1099-k tax forms in early 2023. As the Wall Street Journal notes, this also means that opponents of the $600 rule can push for a change in the law next year.

“The additional time will help reduce confusion during the coming 2023 tax filing season and provide more time for taxpayers to prepare and understand the new reporting requirements,” according to Acting IRS Commissioner Doug O’Donnell.

Congress passed the $600 threshold for Form 1099-K reports as part of the American Rescue Plan Act in March 2021, scheduling it to take effect for tax year 2022. Until the change, platforms had to report users’ income to the IRS if they had more than 200 transactions and $20,000 of revenue. Lawmakers lowered the threshold to boost tax compliance in an area where it is often lacking—unreported business income.

In the waning days of this year’s congressional session, lawmakers in both parties discussed raising the $600 threshold or delaying implementation. After those efforts failed this week, the IRS stepped in with the delay. Treasury and IRS officials said Friday that they hope to work with industry groups over the next year to make sure the forms go to the right taxpayers. -WSJ

The rule was set to affect millions of gig workers who are independent contractors and haven’t been reporting income on their tax returns. What’s more, the law didn’t differentiate between people running a business, and those who are “casual” sellers who are cleaning out closets and attics.

What’s more, the gross revenue on the form isn’t necessarily all income depending on the cost basis of the items being sold, or whether the items were inherited and are now worth less than their value on the date of the death.

The delay doesn’t change what income is taxable, however, just what information the IRS will receive. Gig workers are still required to track and report all income, they just won’t have e-commerce sales platforms ratting them out.

As the Journal also notes, the reporting rules aren’t aimed at people using Venmo or other payment apps for gifts or splitting the cost of meals.