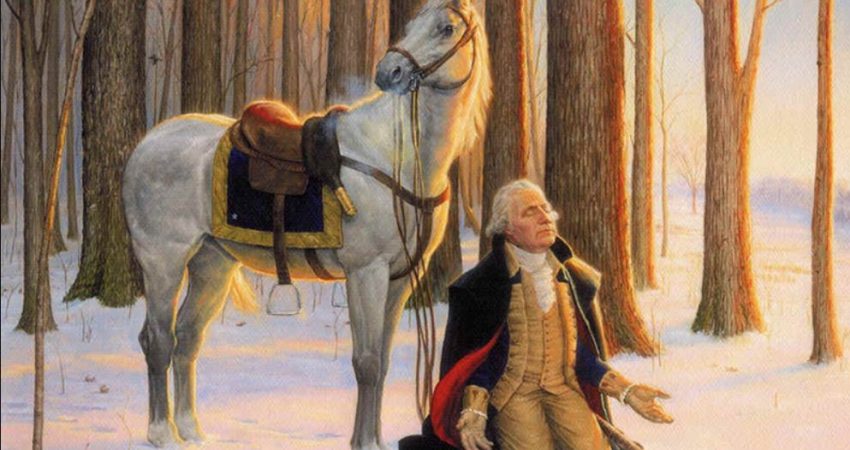 Late in 1776, the Revolutionary War looked like it was a lost cause. The patriots lacked uniforms, food, ammunition and weapons and some were even shoeless. There was tremendous suffering from cold and starvation. A series of defeats had depleted morale, and many had already deserted.

In the bitter cold on Christmas Eve 1776, dogged by pelting sleet and snow, George Washington knelt in prayer at McKonkey’s Ferry asking the Lord for the right words to inspire his troops to keep going. They needed to cross the Delaware River for a surprise attack on the British.

Historian James Cheetham wrote, “As Washington mounted his horse that night he pulled a draft of Thomas Paine’s ‘American Crisis’ from his saddle bag. As he began reading it, he knew that it was the answer to his prayers. When he returned to camp he ordered it read to his troops immediately.”

“The summer soldier and the sunshine patriot will, in this crisis, shrink from the service of their country; but he that stands by it now, deserves the love and thanks of man and woman. Tyranny, like hell, is not easily conquered; yet we have this consolation with us, that the harder the conflict, the more glorious the triumph. What we obtain too cheap, we esteem too lightly: it is dearness only that gives a thing its value. Heaven knows how to put a proper price upon its goods; and it would be strange indeed if so celestial an article as freedom should not be highly rated.” – Thomas Paine

The next morning, Christmas Day 1776, Washington’s army crossed the icy Delaware and won two crucial battles. He defeated the British at Trenton and a week later he executed a daring night raid to capture Princeton on January 3. This gave control of New Jersey to America and turned around the morale and unified the colonial army. Washington’s insightful reading of “The American Crisis” on Christmas Eve 1776 turned a humbling defeat into a glorious victory for the American patriots!

Shortly after the war John Adams remarked: “Without the pen of Paine, the sword of Washington would have been wielded in vain.” Washington’s men basked in its victory at Trenton since they had defeated a much mightier foe. Moreover, they realized Washington was a true leader and he could unite the colonies into a strong nation. Washington’s faith in the Lord and his respect for the scholarly works of our Enlightenment thinkers like Thomas Paine, John Locke and others would help him articulate the Philadelphia Convention and write the world’s longest lasting constitution.

The Lord guided Washington to victory on Christmas in 1776 at a time America needed a miracle to become a nation. He showed our founders how to form a more perfect union of states in 1787. He has continued to bless this nation in so many ways since 1776. Let us pray He will help us unite this divided nation so we can always defend our liberty. Merry Christmas.

“It is written in the Bible that the Great Author of the Universe has provided man the authority for self government. It is His providence we shall respect to guide this nation.” – George Washington

Gen. Patton’s Greatest Victory Happened After He Called on His Entire Army To Pray 75 Years Ago

In the days leading up to this make-or-break moment in the Allied push to defeat Nazi Germany, Patton called on his entire Third Army to pray.

The legendary general’s forces led the Allied break-out of Normandy, France, in August 1944.

By the end of September, Allied forces stood poised to enter Germany after liberating much of France.

However, what the Nazi forces could not do, the weather did, bringing the Allies nearly to a halt.

Europe’s unusually wet fall bogged down the Third Army and the rest of the Allied forces for the next two months, as they waited for the dirt roads to dry.

The situation became so frustrating to Patton that on another rainy day in early December, he asked the Third Army’s head chaplain, James O’Neill, for a weather prayer.

By O’Neill’s account, the general said the weather would need to change if they were going to win the war.

The Catholic priest drafted a prayer card and hand-delivered it to Patton, who read it and ordered, “Have 250,000 copies printed and see to it that every man in the Third Army gets one.”

The prayer card read: “Almighty and most merciful Father, we humbly beseech Thee, of Thy great goodness, to restrain these immoderate rains with which we have to contend. Grant us fair weather for battle.”

On the back of the card was a Christmas greeting from the general, which stated, in part, “I have full confidence in your courage, devotion to duty, and skill in battle. We march in our might to complete victory. May God’s blessing rest upon each of you on this Christmas Day.”

After Patton issued his order to O’Neill, he asked how much praying the chaplain felt the soldiers were doing.

O’Neill answered that he did not think it was much. When there’s fighting, everybody prays, but “when things quiet, dangerously quiet, men just sit around and wait for things to happen,” he replied.

“Chaplain, I am a strong believer in prayer,” Patton responded. “A good soldier is not made merely by making him think and work. There is something in every soldier that goes deeper than thinking or working — it’s his ‘guts.’ It is something that he has built in there: It is a world of truth and power that is higher than himself.”

The war leader referred to the account of Gideon in the Bible who, despite being greatly outnumbered, fought bravely and prevailed because the Lord was with him.

Patton contended that his men should be praying, wherever they were — or eventually they would “crack up.”

Michael Keane, the author of “Patton: Blood, Guts, and Prayer,” told The Western Journal, “It is impossible to exaggerate the important role that faith and prayer played in Patton’s life. Prayer was a part of his daily ritual and he felt a deep personal faith that sustained him during times of adversity.”

Patton directed O’Neill to put out a training letter on the importance of prayer to every chaplain and to every commander down to the regimental level, 3,200 copies in all.

The spiritual leader exhorted in his letter: “We must urge, instruct, and indoctrinate every fighting man to pray as well as fight. In Gideon’s day, and in our own, spiritually alert minorities carry the burdens and bring the victories.”

O’Neill’s training letters and prayer cards went out to the Third Army’s ranks starting Dec. 12, 1944. Events on the battlefield took a dramatic turn on December 16.

Nearly one hundred miles to the north of Patton’s Third Army sector near Germany’s border with France, Adolf Hitler pulled some of his best units from battling the Russians on the eastern front to participate in a bold strike which he hoped would both dishearten the Allies and buy him time to strengthen Germany’s defenses.

The massive German thrust enveloped thousands of Allied soldiers — including 11,000 from the 101st Airborne Division in Bastogne.

The Allies could not employ their air cover because of the weather.

The German commander near Bastogne ordered the surrounded 101st to immediately surrender — to which the American commander, General Anthony McAuliffe, famously replied, “Nuts.”

The German troops tried to break the hold on Bastogne while also pushing west, creating a 50-by-30-mile-wide bulge in the Allied lines.

Prior to the German Ardennes offensive, Patton had his staff working on a contingency plan because he sensed their foe might counterattack in the Bastogne region.

Patton amazed all in a meeting called by Supreme Allied Commander General Dwight D. Eisenhower to formulate a response to the German offensive by saying that the Third Army could counterattack with three divisions in seventy-two hours in the Bastogne region.

His forces were currently 85 miles to the south, with a portion already engaging the enemy — and the muddy roads were now icy and snow packed. Eisenhower gave the unrelenting Patton the green light to implement his plan.

On the same day the German commander demanded the 101st Airborne’s surrender (Dec. 22), Patton’s forces hit the southern edge of the bulge — but still over 30 miles from the besieged city.

That morning, likely after most of the Third Army’s soldiers had received their prayer cards, the weeks-long cloud cover finally broke to a clear, sunny and crisp 10-degree Fahrenheit day.

The clear weather meant the hard-pressed defenders of Bastogne could finally be re-supplied with ammunition and food by parachute airdrop while Allied fighter aircraft could strike German ground forces. Experiencing nearly 300 casualties per day, the 101st could only hope to hold out a few more days.

Finally on Dec. 26, a beautiful sight appeared in the distance: a Sherman tank bearing the American star. The advanced elements of Patton’s Third Army were on their way, carving a tenuous, narrow corridor to the 101st that would widen the next day.

Patton, amazed by how quickly the weather changed, decided to award O’Neill the Bronze Star.

“Chaplain, you’re the most popular man in this Headquarters,” he told the priest. “You sure stand in good with the Lord and with the troops.”

Dr. Conrad C. Crane — chief of historical services for the Army Heritage and Education Center — told The Western Journal that Patton’s leadership during the Battle of the Bulge was his most impressive military feat as Third Army’s commander.

“[Patton’s] greatest accomplishment is when he turned his army 90 degrees in the middle of winter in December of ‘44 to attack into the flank of the Bulge, relieve Bastogne and help blunt the German drive there,” Crane said.

“During the operation the Third Army moved farther and faster and engaged more divisions in less time than any other army in the history of the United States — possibly the history of the world,” Patton wrote in his book “War As I Knew It.”

The Third Army continued attacking the enemy throughout the sector. With the help of Allied units to the north, by the end of January it had completely pushed back the Bulge and continued into Germany.

Patton saw O’Neill during this time frame and said to him, “Well, Padre, our prayers worked. I knew they would.”

He then cracked O’Neill on the side of his steel helmet with his riding crop, which the chaplain knew was his way of saying, “Well done.” 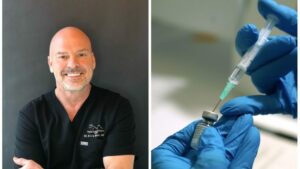