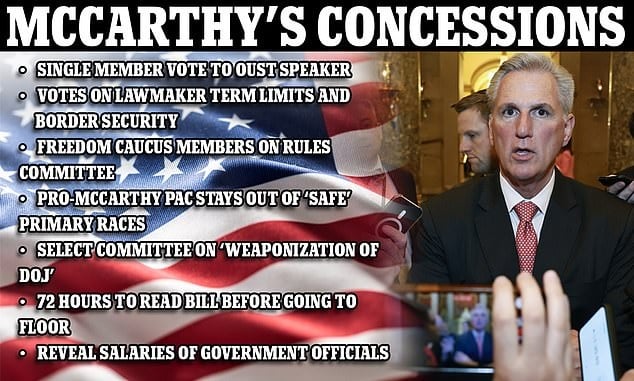 Kevin McCarthy apparently gave away the farm to put him in place to win the Speakership of the US House. But the list of items requested for votes is missing the biggest thing.

Kevin McCarthy‘s concessions to a group of arch conservatives has won him 15 votes and (maybe) counting – while also likely ensuring future headaches, floor fights, Senate clashes and perhaps even a crisis over whether the U.S. goes into default.

The final concessions that McCarthy negotiated were enough to bring over a group of fellow elected lawmakers who had voted against him repeatedly on 12 successive votes, amid the prolonged televised spectacle.

They got nearly everything they asked for – beyond subcommittee gavels that other members of the Conference rejected as an unfair boost, although McCarthy still wasn’t able to prevail on the 13th vote to elect him as Speaker.

According to the report, the list of items McCarthy promised is as follows:

Noticeably missing from the list is investigations into the 2020 and 2022 Elections and reasons for certifying the uncertifiable results.

Both elections included election disqualifying corruption in systems, processes and people that made the elections uncertifiable.  This country will never survive as long as elections are stolen from the American people.

Without free and fair elections, this country is not free.

Lauren Boebert — ‘Massive victory’ for the MAGA base