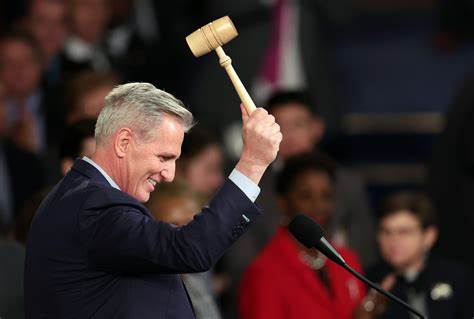 House Speaker Kevin McCarthy will give a new subcommittee, which will investigate the ‘weaponization’ of the federal government, unprecedented powers to access classified information and review ‘ongoing criminal investigations.’

The newly-minted Speaker agreed to the move as part of a raft of concessions to group of fellow Republicans who had voted against him in 14 ballots during four days of chaos in Congress.

McCarthy is going to allow this select subcommittee access to any information shared with the House Intelligence Committee, which receives the highest-level of classified intelligence and briefing of any committee in Congress.

The provisions appear to have been added during final negotiations between McCarthy and a band of hardline detractors that denied him the speakership.

An earlier version of the proposal made no mention of ongoing criminal investigations or the Intelligence Committee and limited the probe to the FBI, Department of Homeland Security and the Department of Justice.

“I Would Drop Him Like a Bag of Dirt” – Rep. Mike Rogers Accused of Drinking After He Lunged at Matt Gaetz After 14th Failed Vote for Speaker

As reported earlier by 100 Percent Fed Up – After four days of voting on the House floor for the next speaker, tempers flared tonight when Republican Rep. Mike Rogers of Alabama lunged at Rep. Matt Gaetz (R-FL), the congressman who’s been leading the effort to prevent Kevin McCarthy from becoming the next Speaker.

Chaos ensued on the House floor as the 14th vote for Speaker fell short by one vote for McCarthy.

Daily Mail reports – McCarthy immediately walked up to Reps. Matt Gaetz and Lauren Boebert, presumably with the intent of persuading them to change their ‘present’ votes to ‘yes.’

The Republican lawmaker from Alabama, a member of the House Steering Committee responsible for making committee chair recommendations, recently threatened the holdout Republicans who don’t vote for McCarthy that they will be stripped of committee assignments.

On Saturday we learned that there may have been some drinking involved before the fracas.

According to Burchett, who was standing next to Rep. Rogers during the heated exchange, had this to say, via Mediaite,

“Tim Burchett, who was in between Matt Gaetz and Mike Rogers during their confrontation on the House floor, tells me Rogers was making threats about ending careers. “People shouldn’t be drinking, especially when you’re a redneck, on the House floor,” Burchett said.

“I would drop him like a bag of dirt,” Burchett said of Rogers. “Nobody’s gonna put their hands on me. Nobody’s gonna threaten me.”

“It’s just one of those things — you’ve been around fights before, you’ve seen it. Some guy gets in your face and then it’s just an unfortunate moment is all it was. It shouldn’t have happened. He shouldn’t have crossed that line,” Burchett said.

Thousands of opponents of socialist convicted felon President Luiz Inácio Lula da Silva stormed his offices and the headquarters of the Congress and Supreme Federal Tribunal (STF) of Brazil on Sunday, reportedly demolishing the facades of two of the three buildings and causing “irreparable” damage to priceless artifacts in the chambers.

The riot in Brasilia occurred while Lula himself was in Sao Paulo state assessing the damage of recent floods. Lula, in a public statement following police action to subdue the protesters, announced an official “federal intervention” in Brasilia – consolidating the public security powers of several agencies into the hands of a hand-picked, top-level official – and accused police of acting in “bad faith” in failing to prevent the protesters from storming the buildings.

The incident is an offshoot of months of protests following the October presidential election that saw Lula narrowly defeat then-incumbent President Jair Bolsonaro in two rounds of voting. Most protesters support Bolsonaro but, more broadly, oppose Lula’s victory as illegitimate on several grounds, including his multiple convictions on charges of corrupt acts occurring during his first two terms as president. An audit of the 2022 runoff presidential election, which featured only Bolsonaro and Lula as candidates, by the Armed Forces of Brazil concluded that no guarantee could be made of the absence of fraud or irregularities.

Protesters also accuse the STF, particularly its head justice Alexandre de Moraes, of intervening in the election by censoring mentions of Lula’s corruption case and silencing Bolsonaro supporters through fines and police raids.

Many of the protesters convening in Brasilia on Sunday are part of a movement demanding that the nation’s military oust Lula. They insist that their demand is not for a coup d’etat, but for a “military intervention” they say the Brazilian constitution provides for in the event of an illegitimate election.

‘Today’s ruling is a win not just for me, but for all the parents and citizens of Loudoun County who have been systematically silenced and shut out of the process by this School division over the last few years,’ said Jon Tigges.

A father who protested against a woke race and LGBT agenda infecting his local public schools won his case when a judge dismissed trespassing charges against him.

“Not guilty,” Jon Tigges, a military veteran, tweeted on January 5, announcing he had won his case stemming from a contentious Loudoun County school board meeting in June 2021. Tigges had been charged with trespassing after he asserted his First Amendment right to speak out at a school board meeting.

“Today’s ruling is a win not just for me, but for all the parents and citizens of Loudoun County who have been systematically silenced and shut out of the process by this School division over the last few years,” he added in a separate media statement. “I didn’t serve my country for decades overseas only to come home and have my rights trampled on here. I hope this victory only encourages more parents to speak out and get involved to take back their children’s education and reclaim their basic rights.”

According to Tigges, the county judge ruled that Superintendent Scott Ziegler did not have the authority to remove citizens from an open meeting.

Ziegler no longer works for the district after a grand jury found he covered up the sexual assault of a female student by a cross-dressing male student. Ziegler is accused of covering up the criminal activity because it would have reflected badly on LGBT bathroom policies which allow gender-confused males to enter women’s locker rooms and bathrooms without any restrictions. He was indicted in December.

The protests at school board meetings, particularly in the affluent and liberal Loudoun County near D.C., were used as a pretext for President Joe Biden and Attorney General Merrick Garland to order federal agents to keep a close eye on average American citizens speaking out against school COVID policies as well as pro-LGBT and critical race theory content in the classrooms and school libraries.

More evidence continues to surface that shows that Ivermectin is both safe and effective in treating Covid-19.

In a meta-analysis that includes dozens of studies examining the effectiveness of Ivermectin in treating Covid-19, 100% of studies found that using Ivermectin as a treatment yielded positive results.

The studies found that Ivermectin was both safe for use in proper doses and effective in reducing mortality for Covid-19 patients.

Still, medical professionals are being ridiculed and in some cases risk losing their jobs for prescribing patients Ivermectin as a Covid-19 treatment.

The FDA and state governments have continued to ignore mounting evidence proving the effectiveness of Ivermectin, meaning that there are doctors who are being investigated by their state medical boards for prescribing Ivermectin.

In some cases, medical professionals have claimed that they are being sent threatening notices/letters from prosecuting authorities in states such as New York.

In a meta-analysis of 63 studies of ivermectin versus COVID-19 in humans, 100% of these have shown positive results. Studies were from all continents except Antarctica. Considered individually, 29 of those studies were found to be statistically significant regarding use of ivermectin alone. Over the 63 studies in meta-analysis, pooled effects showed 69% improvement in early treatment, and prophylactic use showed 86% improvement. Of those studies in the meta-analysis that were peer-reviewed, overall improvement in early treatment was found to be 70% (64% in randomized controlled trials), and 86% of those in which ivermectin was used prophylactically showed improvement (84% in randomized controlled trials).

Mortality from COVID-19 over all time periods of delay in treatment was 76% improved over controls (69% in randomized controlled trials), whereas mortality was improved 84% in early treatment of COVID-19 (82% in randomized controlled trials). Forty studies were excluded from the meta-analysis for complicating factors or insufficient detail reported, and these also showed 100% positive results.