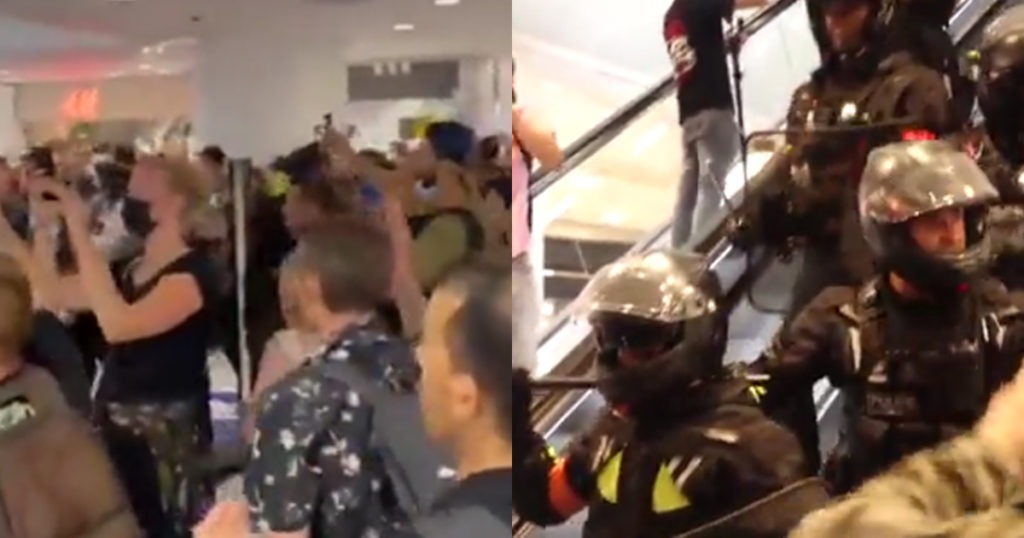 Video appears to show French protesters storming a shopping mall while refusing to provide proof of vaccination, only to have SWAT police try – and fail – to stop them as France erupts in protests, with more than 200 planned actions being taken in opposition of the country’s new vaccine passports.

According to Canadian journalist Marie Oakes, French protesters stormed a shopping center and refused to provide their vaccine passports “in protest to the mandatory domestic vaccine passes in the country.” Police then stormed the mall themselves, adorned in full tactical gear, but were “unable to prevent people from being in the shopping centre.”

Video shows unmasked protesters rhythmically chanting “Liberte!” and clapping, while some individuals wearing masks cautiously record the event. A second video shows dozens of police officers being cornered by protesters and retreating to an escalator in an apparent attempt to escape the confrontation.

The protest appears to have been one of hundreds that occurred in France on Saturday. According to World News Here, “More than 200 demonstrations” against the vaccine passport were “scheduled for Saturday across France,” with “thousands of people” taking to the streets in Paris.

Five rallies were scheduled in Paris, featuring populist political parties, while other protests were held in cities and towns as far flung as Valence, Nice, Toulon, Lille, and Albertville, where protesters chanted “We are here, even if Macron does not want us.” Authorities expected between 130,000 and 170,000 people to participate in the protests.