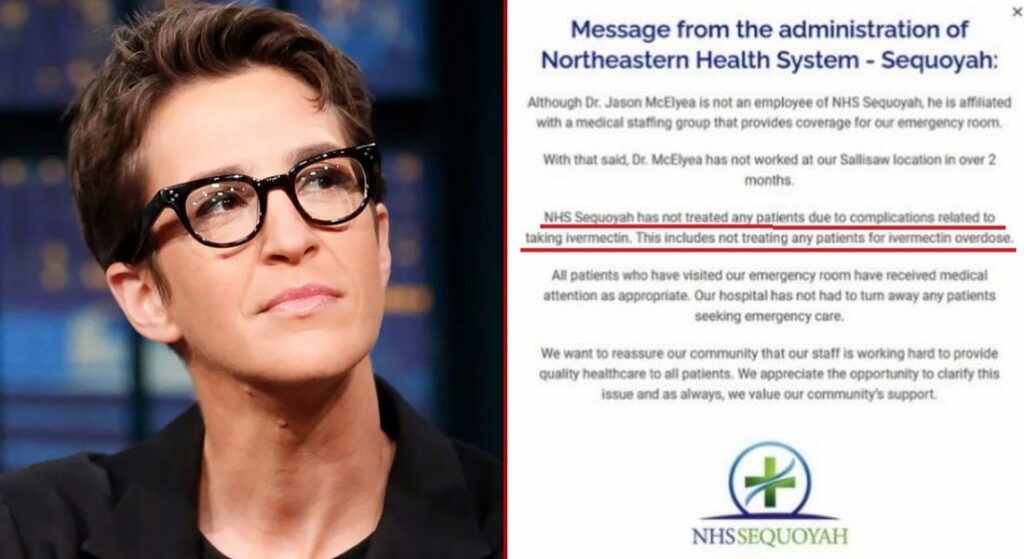 Rachel Maddow is no stranger to fake news. But the MSNBC host’s wild conspiracy theories and inaccurate reporting has typically revolved around political gossip, Capitol Hill intrigue, and a chronic case of Trump Derangement Syndrome.

On Saturday, however, the MSNBC host’s personal Twitter account amplified a local tall tale about the drug Ivermectin, which has progressives throwing a tizzy over anecdotal cases that it may have helped some people recover from Covid. (Joe Rogan being the case in point.) Maddow took the local story and blew it up into a national one.

“A rural Oklahoma doctor said patients who are taking the horse de-wormer medication, ivermectin, to fight COVID-19 are causing emergency room and ambulance back ups,” News 4 reported on Friday.

“A rural Oklahoma doctor said patients who are taking the horse de-wormer medication, ivermectin, to fight COVID-19 are causing emergency room and ambulance back ups,” News 4 reported on Friday.

“There’s a reason you have to have a doctor to get a prescription for this stuff, because it can be dangerous,” said Dr. Jason McElyea.

“The ERs are so backed up that gunshot victims were having hard times getting to facilities where they can get definitive care and be treated,” he claimed.

However, the Northeastern Health System of Sequoyah put out an advisery that he no longer has any affiliation with the hospital network.

“Although Dr. Jason McElyea is not an employee of NHS Sequoyah, he is affiliated with a medical staffing group that provides coverage for our emergency room,” NHS Sequoyah wrote.

“With that said, Dr. McElyea has not worked at our Sallisaw location in over 2 months,” the statement said. “NHS Sequoyah has not treated any patients due to complications related to taking Ivermectin. This includes not treating any patients for Ivermectin overdose.”

“All patients who have visited our emergency room have recieved medical attention as appropriate,” the statement continued. “Our hospital has not had to turn away any patients seeking emergency care.”

“We want to reassure our community that our staff is working hard to provide quality healthcare to all patients,” the statement added.

Rachel Maddow’s report thus was completely discredited by the hospital itself.

Contrary to media misreportage, Ivermectin is not just a ‘horse dewormer’ medication. It is a Nobel-prize winning treatment for human beings that has been used as an anti-parasitic. The FDA nonetheless has cautioned people against taking it without a doctor’s prescription, which would include taking doses intended for barn animals.