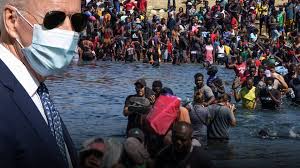 Department of Homeland Security Secretary Alejandro Mayorkas confirmed Friday that Haitian migrants crossing the Southern border were not tested for coronavirus before they were released into the United States.

“We did not test that population of individuals,” Mayorkas said when asked by reporters about the possibility of migrants contracting the virus in the makeshift camp under the bridge in Del Rio, Texas, that held over 15,000 migrants last week.

Mayorkas spoke about the migrant crisis during an appearance at the daily press briefing at the White House.

He said that DHS officials set up medical tents with 150 medical professionals to help the population of migrants but claimed he was personally not sure if any of them got sick with the coronavirus.

“We certainly had some individuals get sick, not specifically with COVID, to my knowledge,” Mayorkas said.

He confirmed that some of the migrants were released in the United States, but used the term “alternatives to detention” to describe the process.

“We remain in touch with them. We monitor them to ensure their appearance in court at the designated time of appearance,” he said.

The White House continues struggling to explain why migrants apprehended on the Southern border are not tested for coronavirus or required to provide proof of vaccination for the virus, despite requiring it from travelers to the United States.

“They’re not intending to stay here for a lengthy period of time,” White House press secretary Jen Psaki said on Monday, referring to migrants. “I don’t think it’s the same thing. It’s not the same thing.”

Mayorkas said that over 12,000 migrants in the camp were allowed to remain in the United States.

“Approximately 12,400 individuals will have their cases heard by an immigration judge to make a determination whether they will be removed or permitted to remain into the United States,” he said.