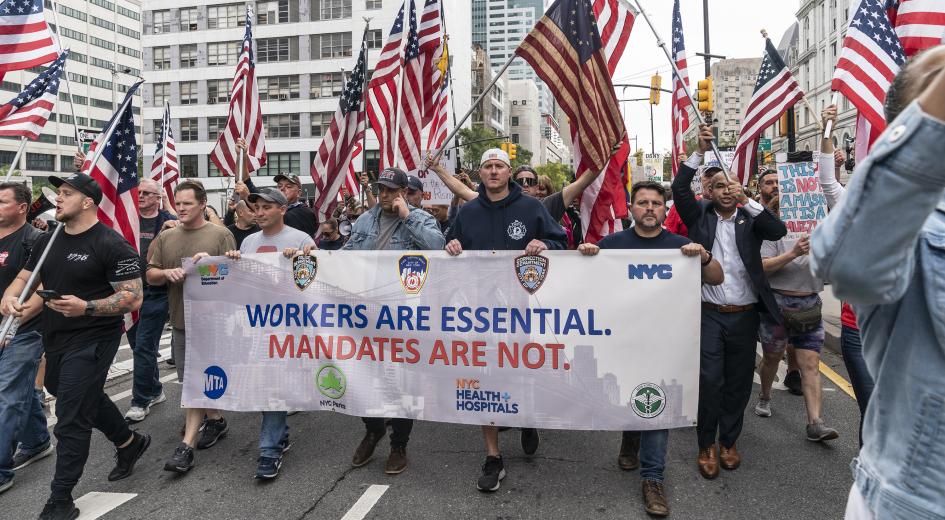 The Occupational Safety and Health Administration is about to require 80 million working Americans to get vaccinated. You may be among them.

Declaring that his patience was “wearing thin” with unvaccinated Americans, President Joe Biden on Sept. 9 announced that OSHA would require companies with at least 100 employees to mandate that workers either get vaccinated or submit to weekly COVID-19 tests.

And then get sued.

As we detail in our legal analysis, the courts will almost certainly strike down the OSHA vaccine mandate. Here are a few reasons why:

To take the “emergency temporary standard” shortcut, the agency must persuade a court that workers are in “grave danger” and that it is “necessary” to protect them against that danger.

The danger a virus causes, by contrast, derives from its ability to replicate within a living organism.

Congress created OSHA to promote workplace safety. OSHA inspectors look for hazards that can potentially harm employees, such as improperly stored chemicals, inadequately lighted or ventilated workstations, or lack of protective equipment (e.g., gloves and hard hats). Vaccines against viruses are an entirely different form of protection and are beyond the scope of OSHA’s mandate.

Both agencies are within HHS. OSHA resides in the Department of Labor. Congress has given neither OSHA nor the Labor Department authority over vaccines.

If Congress did not authorize the agency it empowered to regulate vaccines to mandate their use, OSHA—which has no such power—certainly lacks that authority.

The U.S. has suffered through smallpox, polio, and a raft of other diseases—including the seasonal flu—for which vaccines are available. The federal government has never imposed a general vaccine mandate. Nor has any agency claimed authority to issue such a sweeping mandate.

If Congress had authorized a mandate, it would not have encrypted it and concealed it in an obscure subsection of the OSHA statute. Congress does not, as then-Supreme Court Justice Antonin Scalia wrote, “hide elephants in mouseholes.”

In charging ahead with a legally dubious mandate, the Biden administration is repeating a familiar pattern. Last summer, the CDC renewed an eviction moratorium that faced certain judicial doom. The agency nevertheless issued the moratorium on Aug. 3. The high court enjoined it on Aug. 26.

“There you go again,” Ronald Reagan might have said of OSHA’s vaccine mandate.

Defenders of the mandate will note that OSHA has established standards regulating bloodborne pathogens like HIV and various forms of hepatitis. Nurses, medical technicians, and others must follow those standards when they draw blood or start IVs, for example.

Those are distinguishable from the proposed vaccine mandates in at least two ways. First, OSHA followed a notice-and-comment rulemaking process and did not resort to an emergency temporary standard. Second, Congress took the extraordinary step of rewriting the regulation in 2001, leaving no doubt that it intended for the agency to exercise that authority.

The bloodborne pathogen standard requires health care facilities to offer free hepatitis B vaccines to employees at risk of contracting that illness from needle sticks. Health care workers can decline those hepatitis B vaccines. Thus, even where Congress has given OSHA authority to issue narrowly targeted standards dealing with bloodborne pathogens, the agency did not mandate that workers be immunized.

In short, Congress has not given OSHA license to mandate COVID-19 vaccines.

Lawmakers needn’t prohibit OSHA from imposing a mandate that they never authorized the agency to issue in the first place.

On the contrary, if Congress wants a general vaccine mandate, it must pass a law establishing one.