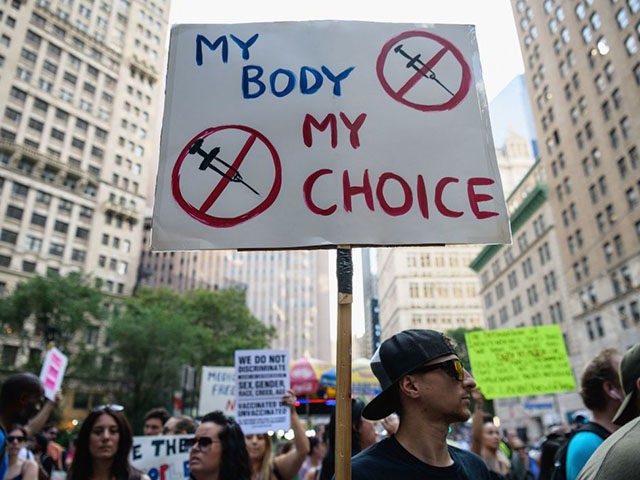 Campus Reform published a video on Thursday of reporter Ophelie Jacobson interviewing college students at the University of Florida regarding the philosophy of ‘my body my choice,’ as it relates to abortion and vaccine mandates.

Jacobson visited the campus to interview students about the “my body my choice” argument as it relates to both abortion and vaccine mandates to see if “students apply that same logic” to both issues.

Jacobson first asked students if they were pro-life or pro-choice to which the overwhelming majority identified as pro-choice.

“I’m pro-choice, I think women have the right to decide what they want to do with their bodies, and also you never know the situation,” one student said.

“Pro-choice. I don’t think that I have a right to force my decision on someone else’s body,” another student explained.

“I’m pro-choice and the truth is that no one is in your body but you and it’s your life that you have to live,” a third responded.

“Would you agree with the idea of my body my choice?” Jacobson asked one student.

Jacobsen then asked the students if they are for or against government vaccine mandates.

“I’m for it. I’m vaccinated,” said the student who had just endorsed the concept of ‘my body my choice.’

“I would say that I guess I am more for a mandate if it is in support of the general health of the population,” another student responded.

“I would be okay with the vaccine mandate,” a third student said, while another stated, “I agree with government mandates.”

Jacobson followed up with a student, asking, “What happened to the ‘my body my choice’ argument in that circumstance?”

“I feel like that’s regarding, well I guess, hmm. You kind of caught me that was really good” she laughed.

One student who identified as pro-choice held a similar philosophy regarding the government vaccine mandates.

“I would have to say against, because like I said you can’t tell me what to do,” the student said. “You can’t be pro-choice and not approve of people’s choices. You know what I mean? It’s a choice.”

Jacobson then asked students, “Isn’t the government telling you what you are doing with your body by instating a vaccine mandate, would you agree with that?”

“So then fully developed humans should also have the choice to get a vaccine?” Jacobson asked, to which the student responded “yes” after a long pause.

“I do understand that like a mandate is kind of contradictory to my body my choice,” one student said.

She went on to add, “If I’m here saying my body my choice for abortion, that also would go with a vaccine mandate.”

“I mean we’re all adults here pretty much we can make the decision what we want to, whether or not if we want to get vaccinated, if we want to get the abortion,” one student replied after previously endorsing mandates.  “It is your body your choice. This is a really good interview and you did catch me there, so I give you that one.”