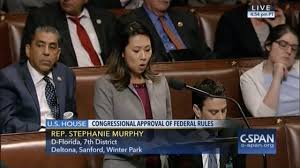 “She voted for both swamp sham impeachments of President Donald J. Trump, supports the radical BLM movement, backs unconstitutional gun-grabbing laws, is in favor of open borders, and votes with House Speaker Nancy Pelosi 95% of the time. Murphy has even advocated for the banning of anyone who attended the 2020 “Stop The Steal” rallies or shared “Qanon” content from serving in the military or obtaining security clearances.”

With the January 6th Committee giving us a Mueller Witchunt2.0, this GP journalist believes that the American people deserve to know that one of the key members of the J6 Committee may be compromised by the Chinese Communist Party.

For years, this journalist has covered Congresswoman Stephanie Murphy of Central Florida, who co-chairs the allegedly moderate Blue Dog Coalition. While Murphy has consistently argued that she is a “moderate” problem solver that Independent and Republican voters can trust, the truth paints a very different picture.

She voted for both smamp sham impeachments of President Donald J. Trump, supports the radical BLM movement, backs unconstitutional gun-grabbing laws, is in favor of open borders, and votes with House Speaker Nancy Pelosi 95% of the time. Murphy has even advocated for the banning of anyone who attended the 2020 “Stop The Steal” rallies or shared “Qanon” content from serving in the military or obtaining security clearances.

When the Chinese Communist Party unleashed the Coronavirus pandemic on the world, Murphy openly called on President Trump to be investigated for the effects of the pandemic, not the CCP.

Congresswoman Murphy even argued that we should remove tariffs on Chinese imports, rewarding the Chinese Communist Party for the deadly global pandemic.

What would motivate her to fight so fervently on behalf of the CCP? As usual, it’s all about the money. As the Tampa Bay Times reported in 2017, Murphy has sought to support legislation to “strengthen” US manufacturing, yet her husband’s company 3n2, which produces sports apparel, manufactures their products in China-based factories.

Congresswoman Murphy even holds a patent on a product she designed for her husband’s company, according to financial disclosures reviewed by Matthew Boyle of Breitbart News for an article highlighting the hypocrisy of Murphy’s involvement in 3n2.

The 1993 Company Law in China requires that all companies based in China, both foreign and domestic, “allow the establishment of units to carry out the activities of the party”, and the very strong hand of the CCP in the private sector has only gotten stronger in recent years as President Xi Jinping has been actively jailing, seizing funds, or “disappearing” prominent billionaires who have crossed his regime.

As far as Murphy’s company is concerned, her husband has continued to admit that some of their most popular products, including cleats and the pants designed by Congresswoman Murphy, are cheaper to produce in China.

Angeli Datt, a Senior Research Analyst on China, wrote in April of this year about how the CCP’s control of clothing and apparel manufacturing, in particular the Xinjiang region where China and the Middle East are linked along the ancient Silk Road trading route.

This area is known to use the forced labor of the Uyghurs and Turkic Muslims who are the subject of gross human rights violations at the hands of the CCP and President Xi Jinpang, which have been called crimes against humanity. According to Datt, 20% of the world’s cotton comes from this region, at the hands of slave labor, to fuel international companies.

Major companies like Adidas, Lacoste and H&M have condemned the crimes against humanity in those forced labor camps in Xinjiang.

Breitbart’s Matthew Boyle rightfully notes that Congresswoman Murphy likes to talk tough on the Chinese Communist Party, just like she talked tough on “strengthening” US manufacturing.

What’s more, the fact that Murphy’s husband’s company is manufacturing a product, for which she is at least partially responsible for inventing, in China runs counter to her public rhetoric claiming she is tough on China, wrote Boyle.

We have to make a very clear distinction that our adversary and competitor is the Chinese Communist Party, not the Chinese people, and certainly not the Asian Americans who have contributed so much to this country. When we attack Americans of Asian descent, we attack ourselves.

The fact that Congresswoman Murphy and her husband have not halted the production of products in China really tells you all you need to know. It’s cheaper for them, no matter what human rights abuses might be occurring in their Chinese facilities.