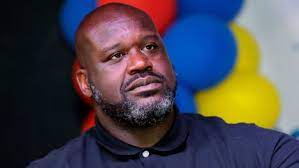 NBA legend Shaquille O’Neal found a way to be just as entertaining off the court as he was for the Lakers, Heat or any of the franchises that welcomed Big Diesel.

The appeal of O’Neal made the basketball icon an equally notable personality. A penchant for honesty also never hurt Shaq — setting up the perfect alley-oop on the topic of COVID vaccine mandates.

On an episode of “The Big Podcast with Shaq,” Shaq discussed the issue with co-host Nischelle Turner, and he played strong defense for unvaxxed Americans.

“Look, I encourage everybody to be safe and take care of their family, I do,” Shaq said. “But there’s still some people that don’t wanna take it. And you shouldn’t have to be forced to take something you don’t want.”

Turner tried to answer back by addressing jurisdiction as a form of justification.

“I don’t think people are being forced to take … Well, there are some … There are, I mean, listen we have a mandate at CBS.”

“Where I wholeheatedly…..” insisted Turner.

“It is forced. Because if the man don’t take it, the man gonna get fired,” Shaq shot back.

As relayed by Fox News‘ Ryan Gaydos, O’Neal wasn’t shy to admit that he’d be willing to appeal to the right rules to avoid getting in any foul trouble; yet in the end, he’ll only play for the right team.

“I’m with you on the rules because I’m a rules guy,” O’Neal admitted. “But I do feel sympathetic towards people who have to make that kind of decision.”

“I understand the issues and all that. But I took the vaccine because I’m not trying to get my mother sick, or my sister or my brother or people around me,” Shaq added.