Solar panels are not a new way of providing cheap power across much of the African continent, where there is rarely a shortage of sunshine. But growing crops underneath the panels is, and the process has had such promising trials in Kenya that it will be deployed this week in open-field farms.

Known as agrivoltaics, the technique harvests solar energy twice: where panels have traditionally been used to harness the sun’s rays to generate energy, they are also utilised to provide shade for growing crops, helping to retain moisture in the soil and boosting growth.

An initial year-long research collaboration between the University of Sheffield, World Agroforestry and the Kajiado-based Latia Agripreneurship Institute has shown promising results in the semi-arid Kajiado county, a 90-minute drive from the Kenyan capital of Nairobi and this week the full project will be officially launched.

For example, cabbages grown under the 180, 345-watt solar panels have been a third bigger, and healthier, than those grown in control plots with the same amount of fertiliser and water.

Other crops such as aubergine and lettuce have shown similar results. Maize grown under the panels was taller and healthier, according to Judy Wairimu, an agronomist at the institute.

“We wanted to see how crops would perform if grown under these panels,” said Wairimu. But there is another pragmatic reason behind the technology: doubling up the output of the same patch of earth to generate power and cultivate food can go a long way towards helping people with limited land resources, she said.

According to Dr Richard Randle-Boggis, a researcher at the University of Sheffield’s Harvesting the Sun Twice project, the trial initiative will determine the potential of agrivoltaic systems in east Africa.

“We needed to build a test system to see if this technology will be suitable for the region,” Randle-Boggis said, reiterating that, unlike conventional solar mini-grid systems, agrivoltaics have the additional benefits of improving food and water security, while strengthening people’s resilience against the climate crisis, as well as providing low-carbon electricity.

The solar panels do not just reduce water loss from plants and the soil – their shade mitigates some of the stress experienced by plants due to high day temperatures and UV damage, Randle-Boggis said.

Agrivoltaics can have a notable impact on household income in remote locations such as Kajiado. “Women here can spend up to 300 Kenyan shillings (£2) on a bodaboda (motorcycle taxi) fare to the market just to buy vegetables worth 100 Kenyan shillings,” said Anne Macharia, head of training at Latia Agripreneurship Institute.

The solar panels can be placed three metres from the ground, providing ample room for a farmer to work below, or higher in bigger systems to allow access for agricultural machinary.

Randle-Boggis acknowledged the technology has limitations, but says that in “areas of Kenya which are not currently suitable for horticulture, it may be possible to grow other crops under the improved environmental conditions under the panels”.

In other countries including France, the US and Germany, the technology has been employed successfully.

Thanks to a new method called “agrivoltaics.”

A multinational team of researchers is set to begin full-scale trials in Kenya to see if installing solar panels could help the country generate power as well as address food security issues. A previous smaller trial that ran for a year has shown promising results, The Guardian reported. 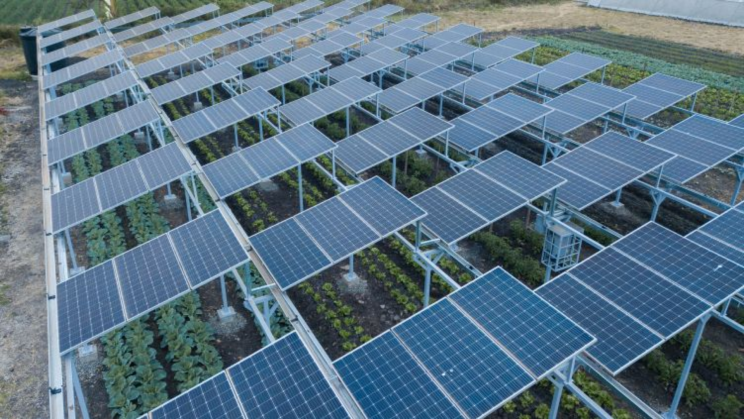 A multinational team of researchers is set to begin full-scale trials in Kenya to see if installing solar panels could help the country generate power as well as address food security issues. A previous smaller trial that ran for a year has shown promising results, The Guardian reported.

Solar panels have long been known to be capable of solving energy problems, especially in remote parts of the world. However, installing them on the ground takes away a critical resource: land. With climate change and a burgeoning population to feed, it is crucial that we retain arable land. Now, a new technique called agrivoltaics allows us to achieve both, grow crops as well as generate power on the same patch of land.

In this method of agriculture, solar panels are installed in a field capable of growing crops with a slight difference. Instead of arranging the array of panels close to each other and on the ground, the panels are instead installed at a height with intentional spacing between them.

By doing so, a small portion of the arable land ends up being used to generate power while the rest can still be used to grow crops. Contrary to popular belief that shade from the panels can be a hindrance to growth, plants have shown improved survival as well as yields in such arrangements.

Researchers attribute this to better management of the stress that the Sun’s heat puts on plants. Being placed in shade protects the plants from damage caused by high temperatures as well as ultraviolet light.

According to The Guardian report, crops such as cabbages, aubergine, and lettuce that were grown using agrivoltaics during a year-long trial in Kenya were bigger in size and even healthier. In addition to this, the arrangement also saved valuable water that would otherwise have been lost to evaporation from the soil as well as plants in the water-scarce regions.

The more favorable environment that is now available due to this arrangement can also be used to grow food crops that were previously unsuitable to the area. Alternatively, farmers can also choose higher-value crops to increase their incomes, said a press release from the University of Sheffield, U.K.

Part of the Global Challenges Research Fund (GCRF), the University of Sheffield is collaborating with a host of international institutes to conduct further trials to study the economic, social, cultural, and political factors that impact such a project. By working closely with people who will end up using the technology, the researchers want to design features that will help the users and then work with policymakers to eventually roll out the technology across East Africa and beyond, the press release said.”