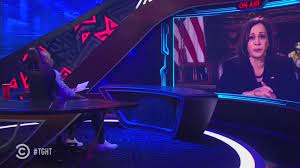 ‘I’m vice president and my name is Kamala Harris’: VP SNAPS at Charlamagne Tha God during testy interview after he asked her if Manchin or Biden is the real president

Kamala Harris on Friday got into a heated exchange with radio host Charlamagne Tha God after he questioned who really held the power in Washington D.C., one that saw Harris’ aide try and stop the interview.

Harris, 57, was asked by Charlamagne – real name Lenard Larry McKelvey – on his Comedy Central show why she and President Joe Biden were unable to press their flagship $1.75 trillion Build Back Better legislation.

His question so angered Harris that her aide, Symone Sanders, could be heard off-camera saying that they had to end the interview and leave immediately.

‘So who’s the real president of this country? Is it Joe Manchin or Joe Biden?’ Charlamagne asks.

‘It’s Joe Biden, and don’t start talking like a Republican about asking whether or not he’s president.

‘And it’s Joe Biden. And I’m vice president and my name is Kamala Harris.’

‘They’re acting like they can’t hear me,’ the 43-year-old host said, as Sanders, Harris’ spokeswoman, attempted to block the camera and stop the interview.

Harris, looking tense, stared at Charlamagne and replied: ‘I can hear you.’

Charlamagne then asked why Biden was unable to convince Joe Manchin, the powerful West Virginia senator, to vote for his proposal.

Manchin’s stubborn refusal to back the government’s plan has put severe obstacles in the passage of Biden’s bill.

Harris told Charlamagne on Friday that the administration had already made great strides, and listed their policy achievements and plans.

‘I hear the frustration. but let’s not deny the impact that we’ve had, and agree also that there is a whole lot more work to be done.