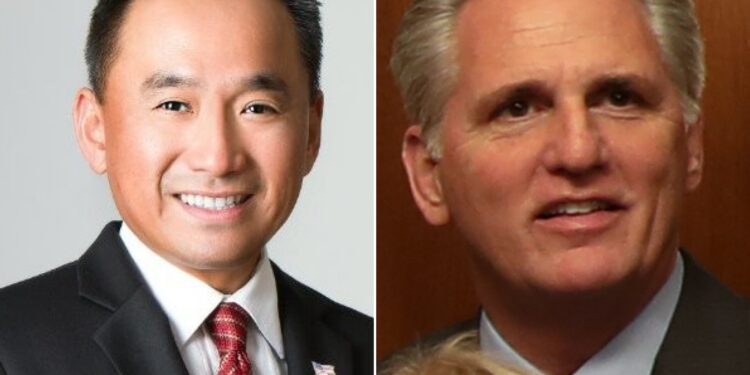 A top California Republican and lieutenant of Kevin McCarthy is closely tied to the Chinese entities identified by the Trump Administration as being linked to the theft and transfer of American intellectual property by and to China.

Chung Cheng Kuo, who is actually from Taiwan, and who purports to work in the insurance industry, has founded several companies, many with ties to China and the Chinese-connected innovation space and business incubator, the ZGC Innovation Center.

Nothing moves in California Republican Party politics without McCarthy’s say-so. The same goes for the selection of its top party brass. Chung Cheng Kuo, the California GOP’s Vice Chair, and Jessica Patterson, the Chairwoman of the California GOP, are no exception.

Politico reported on the election of a homosexual treasurer, Mr. Kuo, and Patterson – labeled McCarthy allies – as if it were a much-needed salve for “battered California Republicans.”

Unsurprisingly, as it turns out, Politico’s salve actually ends up being America’s Poison.

Kuo, who is the Vice Chair under Jessica Patterson, despite being from Taiwan, has deep ties to the Chinese Communist Party’s tech development and intellectual property theft institutions.

Chung Cheng Kuo and the Chinese Threat to America

Mr. Kuo, or “Peter,” as he calls himself, was recently elected Vice Chairman of the California Republican Party.

Politico celebrated the increased diversity, noting that in addition to the Latina Patterson, the party also elected a gay man as well as an East Bay businessman.

The ZGC Innovation Center is run by ZGC Capital, which is controlled by Beijing’s municipal government through the Zhongguancun Development Group (ZDG).

In 2018, Donald Trump’s US Trade Representative and Elsa Kania identified ZGC and the ZGC Innovation Center, with which Kuo is closely tied, as being linked to the Chinese theft of American intellectual property (I.P.) and transfer of American I.P. to China.

Today Strider Technologies announced that it has closed $45 million in Series B funding.

TechBuzz profiled the South Jordan, UT-based company in November 2020 when it raised a $10 million Series A. To date, Strider has secured $57 million in venture capital funding, fueling product development and team growth, and establishing the company’s position in a new market category.

The Series B investment comes at a time of rapid growth for Strider. In 2021, Strider increased annual recurring revenue by over 450 percent with a customer retention rate of 100 percent. Strider’s revenue growth came from premier Fortune 500 companies across semiconductor, pharmaceutical, aerospace and defense, and energy & chemicals industries, and contracts with government agencies.

“Strider is the first company to arm its customers with data intelligence to close the critical security gaps that nation-state actors have exploited for decades,” says Costa Saab, Chief Technology Officer of Valor Equity Partners, and former Senior Executive at the Central Intelligence Agency. “Strider’s solutions are groundbreaking and critical for any organization operating in this increasingly competitive and complex global marketplace. We are proud to support such an important mission and look forward to Strider’s continued growth.”

Strider will use the $45M Series B to enhance existing products, introduce new capabilities, and expand its team and geographic presence to support demand across industry and government markets. Strider will also look to expand its team of intelligence specialists, data scientists, software engineers, and professional and operational support staff all dedicated to protecting the ideals and innovations of the free world.

“Since day one, Strider has been focused on delivering data and software to our customers that empower them to protect their talent, intellectual property, and supply chains. Strider’s growth, and this investment, are further validation of our critical mission,” said Greg Levesque, CEO & Co-Founder of Strider. “We are extremely proud to partner with Valor Equity Partners as well as the continued support from our existing investors.”

“Strider provides a one-of-a-kind technology that empowers organizations to combat the growing nation-state sponsored economic espionage challenge,” said Mike Janke, Co-founder of DataTribe. “Their work is revolutionary, and we are proud to continue to support Strider as they scale their capabilities to help more organizations in need.”

The most recent edition of the ‘Twitter Files’ revealed that FBI officials demanded execs for the social media giant to give them information about how they were enforcing safety online.

Taibbi dubbed this release ‘Twitter Files Supplemental’ and seemed to wonder why the agency was unsatisfied with the idea that it ‘had not observed much recent activity from official propaganda actors.’

Even Yoel Roth, the former ‘Twitter censor’ who was forced to flee after Elon Musk shared part of his thesis which suggested letting children access gay hook-up app Grindr, was uncomfortable with the FBI agent Elvis Chan’s requests.

The released emails show that Roth feared the FBI was breaking the law to help US intelligence engage in domestic operations.

He responded to Chan saying: ‘I’m frankly perplexed by the requests here, which seem more like something we’d get from a congressional committee than the Bureau.’

Taibbi reported the comments, which come after he released the latest batch of ‘Twitter Files’ on the social media site, questioning the legality of an intelligence agency trying to get Twitter’s help in domestic operations.

It comes after Taibbi revealed Friday that the FBI has refused to say how many social media companies it works with, defending their actions after it emerged that agents from the bureau regularly met with Twitter executives and handed over lists of accounts they found questionable.

Officials from the bureau even asked for Twitter to hand over the locations from where the Twitter accounts were being operated, in a disturbing move that many saw as an attack on the First Amendment.

Some of Twitter’s top positions were filled by former FBI agents and executives, tying the two entities closer together as new documents detail their past cooperation.

The Bureau’s former general counsel, James Baker, took on the same role at the social media giant and gave him a say on the censorship and vetting process.

But a deeper dive revealed more than a dozen former federal agents found jobs at the company before Elon Musk’s takeover, the New York Post reports.

Several found themselves in senior positions across the board, with one boasting he co-led Twitter’s Trust & Safety team, the department that oversaw the censorship of the Hunter Biden laptop story in 2020.

It comes as another agent slammed the social media giant’s ‘gross subservience’ to the agency while other firms were ‘totally adversarial’ when asked to hand over customers’ details.

In one email from November 6, 2022, FBI Assistant Special Agent in Charge Elvis Chan forwarded Twitter staff a lengthy list of accounts for review.

Chan wrote that the FBI believed the accounts were ‘violating [Twitter’s] terms of service by disseminating false information about the time, place or manner of the upcoming elections.’

The list of accounts had been sent to Chan by the FBI’s National Election Command Post, which compiles and forwards complaints, indicating that the list may have been based on community tips submitted to the FBI.

The list included Baldwin, the brother of actors Alec and Stephen Baldwin, as well as what appear to be several satire accounts and the right-wing news and commentary outlet Right Side Broadcasting Network.

One of the accounts had as few as seven followers; almost all of the 29 flagged by the FBI had under 10,000 followers.

The most high-profile were Baldwin’s, with 204,900 followers, and Right Side Broadcasting Network, with almost 875,000.

‘It’s no secret the government analyzes bulk data for all sorts of purposes, everything from tracking terror suspects to making economic forecasts,’ said Taibbi.

A Twitter employee responded to Chan on the morning of November 8, indicating which accounts had been suspended.

‘They Fired You!’: Rep. Lauren Boebert Humiliates Nancy Pelosi to Her Face

Colorado Republican Lauren Boebert slammed Nancy Pelosi while speaking directly from the floor of the U.S. House of Representatives.

Pelosi recently received bad news during the midterm election cycle as Republicans took control of the House, and dethroned her from the titles of “majority leader” and “speaker.”

“Madam Speaker, the American people have spoken,” Boebert said. “They fired you and have chosen to end the Democrats’ one-party rule throughout our government.”

“The days of this chamber being treated as Pelosi’s house instead of the people’s house are over,” Boebert continued. “The American people will once again be allowed into this chamber to see their representatives at work.”

In the words of President Donald Trump, Nancy Pelosi is “gone” following numerous Republican victories during the midterm election.

During a COVID-19 EU hearing last October, Pfizer’s President of International Developed Markets, Janine Small, admitted that the vaccine had never been tested on its ability to prevent transmission, contrary to what was previously advertised.

During the hearing, when asked by Dutch politician Ross if the Pfizer COVID vaccine tested on stopping the transmission of the virus before it entered the market, Janine Small responded while smiling,

“Regarding the question around did we know about stopping immunization before it entered the market? No. We have to really move at the speed of science to really understand what is taking place in the market.”

After two years, FDA finally admitted Pfizer’s COVID-19 vaccine had been linked to blood clotting in older individuals based on the result of one of the largest studies of elderly persons aged 65 years and above.

The study was published by the journal Vaccine on Dec. 1.

FDA researchers, with assistance from researchers with the Centers for Medicare & Medicaid Services (CMS), analyzed data from the CMS database. They included Medicare Fee-for-Service beneficiaries aged 65 or older who received a vaccine within the timeframe, were enrolled when they were vaccinated, and were enrolled for a “clean window” of time prior to vaccination. The window was 183 days or 365 days, depending on the outcome.

About 25 million people receive the Medicare Fee-for-Service, but only about 17 million were vaccinated during the period of time studied.

Researchers used probability testing to detect an increased risk of one or more of 14 outcomes following vaccination. The goal was to see whether vaccination may increase the risk of adverse outcomes, such as pulmonary embolism, or blood clotting in the lungs. If an outcome met a certain statistical threshold, that meant it could increase the risk.

All three vaccines have been linked to a number of side effects. Heart inflammation is causally linked to the Moderna and Pfizer shots, experts around the world have confirmed, while Johnson & Johnson’s has been associated with blood clots.