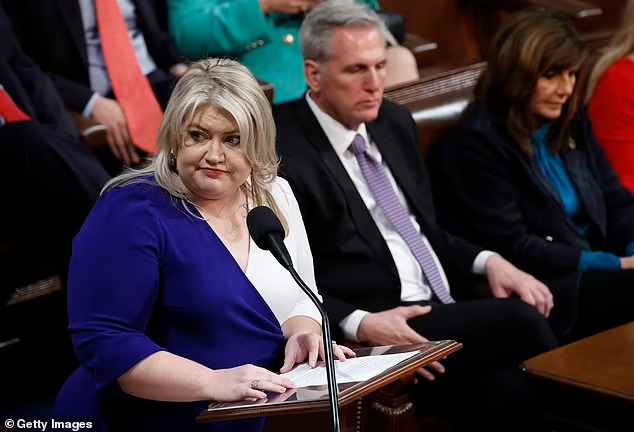 ‘If it wasn’t true, why did they get so offended?’

Rep. Kat Cammack doubled down on accusing Democratic members of Congress of drinking and said the debauchery on Capitol Hill is ‘no surprise to anyone.’

‘Here on Capitol Hill, a place where there are literally cubbies where members have tucked their alcohol aside, it’s no surprise to anyone,’ the Florida Republican said, adding that Democrats only got ‘offended’ because they knew it to be true.

On Wednesday Cammack took to the podium on the House floor to nominate Kevin McCarthy for his six of now ten ballots.

The congresswoman said it was clear Democrats were relishing in Republican division by the ‘popcorn, blankets and alcohol’ they were bringing to votes.

Cammack acknowledged the ‘Groundhog Day’ feeling on the House floor as she nominated McCarthy for Speaker for the sixth ballot.

‘They want us to fight each other — that much has been made clear by the popcorn, and blankets, and alcohol that is coming over there,’ Cammack said.

Democrats erupted over the remark, shouting at the House Clerk to strike it from the record. ‘Take down her words!’ some shouted, as others demanded an apology.

‘If only! If Dems took a shot every time McCarthy lost a Republican, we’d all be unconscious by now,’ Rep. Alexandria Ocasio-Cortez wrote on Twitter.

Earlier many Democrats posted photos on Twitter of tins of popcorn they were bringing to the cloakroom as they watched chaos unfold among their colleagues on the other side of the aisle.

Democrats have been poking fun at Republican in-fighting as McCarthy moves no closer to becoming the House speaker.

McCarthy is now staring down his tenth vote for speaker, having lost 21 Republican votes on the first nine ballots. The House must continue voting on the speaker’s race until it votes to adjourn.

Pelosi’s Congress Falls Off the Wagon

Members of the House of Representatives may now order beer, wine, and spirits and have them delivered directly to their offices, a new development that could help lubricate those late-night budget negotiations. The perk is courtesy of Capitol Hill’s new caterer, hospitality services giant Sodexo, and was first reported by Fox News Channel’s Chad Pergram.

“Wine and beer was often available at catered receptions on Capitol Hill,” tweeted Pergram, known to Fox News viewers for his encyclopedic knowledge of Congress. “But now booze can go directly to a Member’s office.”

A “Drinks on Demand” page on Sodexo’s House of Representatives site offers “bulk orders” for drinks “by the case.” Spirits brands such as Tito’s vodka, Jack Daniels whiskey, Johnnie Walker scotch and more are available for prices ranging from $16 to $35 per bottle. Beer, which can only be purchased by the case, ranges from $25 for a 24-pack of Busch for the thrifty lawmaker to $50 for a case of Red Bear 51st State Hazy IPA.

Is Congress’ Drinking on the Job Part of the Reason They are Failing the American People?

You know that guy that sneaks out at lunch every day and throws back a few? He always comes back chewing gum and all of your co-workers know. It has been alleged that a number of our elected servants couldn’t address government shutdowns and Obamacare without first throwing a few back this weekend.

There is nothing wrong with having a few drinks on your own time, but company time is supposed to be off limits, at least with most occupations. Most would agree that those who drink on the job are showing the signs of a full blown alcoholic. Alcoholics don’t often abide by any kind of etiquette with their drinking. How do I know this? Well, I am a recovering alcoholic myself. I drank before (and after) my own wedding. By the grace of God, it’s been 2 years now since my last drink. Previously, I made it to 5 years before screwing up. I am not the type that can stop at 1 or 2, and envy those who can.

There is nothing wrong with drinking unless you are an alcoholic and there have long been rumors of several of them in congress.

John Boehner is at the top of the list of alleged alcoholics and maybe we should start with him. If you simply type “John Boehner alcoholic” in Google, you will have your choice of many wonderful tales of his habitual drinking and carousing with Capitol Hill staffers.

Former U.S. Rep. Bob Ney, R-Ohio, admits he broke the law and deserved to be sent to prison, but he told WND the corrupt political system desperately needs changing and House Speaker John Boehner is part of the problem.

“I’ve known John Boehner for over two-and-a-half decades. I don’t hate John Boehner. Was I angry at John Boehner in 2006? You better believe it. I make no bones about that. But John Boehner has always been, and this is my opinion, but I think the opinion of many, on the lazy side in the sense that he’s a get-along guy. He doesn’t like a lot of controversy. He’s always enjoyed the golfing. I would have to term it an addiction for John Boehner,” Ney said.

“I’m not calling anyone an alcoholic, being a recovering alcoholic, but I’ve got to tell you John Boehner is a constant drinker of wine. He’s been seen with lobbyists for decades on a nightly basis and drinking. I’m not judging him, but I think it’s part of the story.

I don’t care what any of these guys do when they are “off the clock.” I would rather they not drink and party on my tax dollars, but it truly is none of my business what they do in their personal life if it is not illegal, but, knowing what we know, and suspecting what we suspect, would it surprise you if your congressional servants turned this weekend’s crucial ObamaCare/Government shutdown debate into a little party? Would it concern you if there was a little booze involved in those late night negotiations?

Isn’t that right John McCain? Playing video poker is acceptable of course, but drinking on the job is where any good RINO should draw the line.

Well, you should always consider the source but a couple of left-leaning journalists reported that this weekend’s activities in the House of Representatives were not all business.

I’m not over exaggerating when I say I can smell the booze wafting from members as they walk off the floor.

Kate Nocera is a congressional reporter for Buzzfeed:

I def saw more than 1 member of congress putting a few back on Penn earlier. Ran into 2 in the liquor store.

I think all conservatives should be offended that liberal journalists are exposing our representatives as mindless drunkards. This is not news. We have known this for years.

However, this is not anywhere close to acceptable. This really is worse than John McCain playing video poker, or at least every bit as bad. I don’t like John McCain, so I am not trying to take his side, but come on…

My tax money is paying you around a quarter-mill a year, and you can’t even stay sober for one of the most important legislative debates in our nation’s history?

Tucker Carlson Interview with Matt Taibbi: Twitter files prove Govt was in the censorship business in a huge way