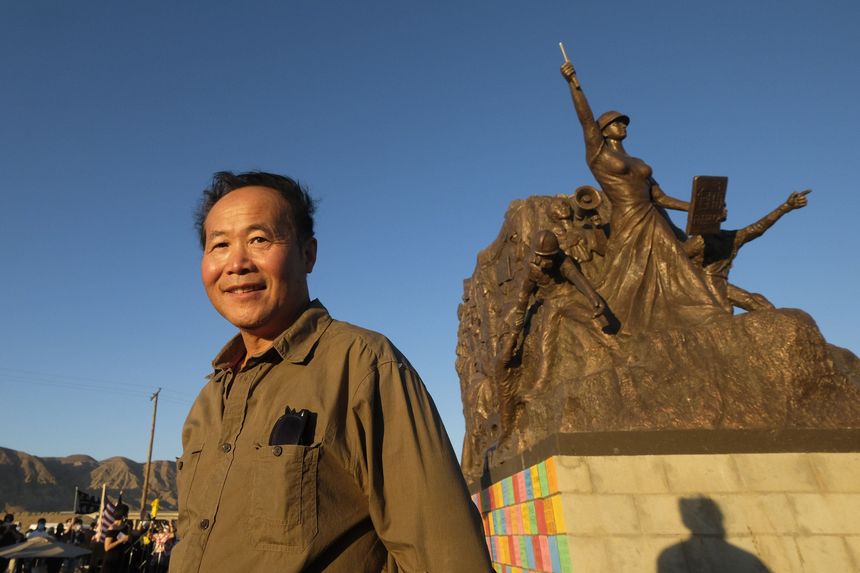 The roadside attraction is an American invention, and none could be more quintessentially American than the one abutting the northbound lane of Interstate 15, smack dab in the middle of the Mojave Desert.

Liberty Statue Park is an open-air memorial to the human desire for freedom. Located on a 36-acre tract, it was founded in 2017 by Chinese-born dissident artist Weiming Chen. The first sculpture Mr. Chen, 66, made for the space was a 15-foot-high bust of the Native American warrior Crazy Horse. In 2018 Mr. Chen added a statue of Li Wangyang, a Chinese labor activist who died under mysterious circumstances in 2012.

The following year, he created what the park heralds as “the world’s largest monument to the 1989 Tiananmen Massacre.” The sculpture stands atop a bronze-relief mural depicting scenes from June 4, 1989, when the Chinese government brutally suppressed a peaceful pro-democracy demonstration in the heart of Beijing. Another statue, “Tank Man,” is a life-size portrayal of the moment an unidentified man holding a briefcase defiantly stared down a column of tanks at Tiananmen.

On June 4, 2021, Mr. Chen added his most provocative piece. “CCP Virus” was an arrestingly macabre bust of Xi Jinping, depicting the Chinese Communist Party chief’s head as a giant coronavirus molecule. The next month, the fiberglass statue was burned to the ground. Mr. Chen didn’t hesitate to assign blame. “Something like this is not a personal action but a Chinese government action against us and the American system of free speech,” he said in a statement to the press. “They want the truth about the origins of the COVID-19 virus to be hidden from the world.”

In February I paid a visit to Liberty Sculpture Park, where a handmade “No Communists Allowed” sign marks the entrance. After a personal tour, I accompanied Mr. Chen and some of his fellow Chinese-born democracy activists for dinner at Peggy Sue’s 50’s Diner, a kitschy eatery adjoining the park. With its Elvis statues, Marilyn Monroe posters and other tchotchkes of midcentury Americana, it was the perfect setting for a lesson in the importance of democracy from people who understand its preciousness all too well.

As we waited for our meatloaf and chicken-fried steak, with Neil Diamond’s “Sweet Caroline” playing, Mr. Chen and his comrades bemoaned America’s fecklessness in the face of mounting Chinese repression at home and aggression abroad. Had I seen Speaker Nancy Pelosi, a longtime advocate of democracy in China, warn U.S. Olympians not to offend their Communist hosts with protests over human rights? Could one imagine her issuing a similar rebuke to National Football League players protesting on behalf of Black Lives Matter?

Jonas Yuan, 33, serves as the park’s official photographer. He told me that unless America is willing to stand up to China, “We will be the last generation to know freedom.” Mr. Yuan is willing to put his own body on the line, proudly displaying a photograph of himself and Mr. Chen on an armed night patrol of the park to protect it from further vandalism. After dinner, Mr. Chen brought me to his studio, where we were greeted by his dogs, appropriately named “Freedom” and “Fighter.”

Last month federal prosecutors unsealed charges against five men, accusing them of acting on behalf of the Chinese Ministry of State Security to “stalk, harass, and spy on” Chinese-born dissidents living in the U.S. According to communications revealed in the complaint, Matthew Ziburis, a former Florida corrections officer, conspired with Fan “Frank” Liu, president of a “purported media organization” in New York, and Qiang “Jason” Sun, a Chinese employee of an “international technology company,” to ruin Mr. Chen’s statues.

Last year, according to the complaint, Mr. Liu instructed Mr. Ziburis to approach Mr. Chen and tell him that he represented a “very rich Jewish man & head of Jewish community” who was a generous donor to the Democratic Party and “especially Nancy Pelosi.” Mr. Ziburis allegedly convinced Mr. Chen to let him install security cameras in his studio to “protect his investment,” in Mr. Yuan’s words.

Although the alleged conspirators didn’t initially plan to raze Mr. Chen’s statue, prosecutors say their plans changed. According to the complaint, Mr. Sun ordered Mr. Liu to destroy “all sculptures and things that are not good to our leaders.” They also allegedly tried bribing an Internal Revenue Service employee to obtain Mr. Chen’s tax returns. “After obtaining evidence, spend money for court and attorney fees to totally get rid of him,” Mr. Liu allegedly told Mr. Sun. According to the U.S. attorney’s office in New York’s Eastern District, where the complaint was unsealed, Messrs. Ziburis and Liu are free on bail and engaged in plea negotiations. Mr. Sun remains at large.

I called Mr. Chen a few hours after the charges were unsealed. He was several glasses deep into a celebratory bottle of champagne. “They want to destroy American free speech and freedom in the arts and the free media,” he says of the regime that incinerated his sculpture. “It’s a very great danger.” I ask Mr. Chen if he felt a yearning to assist Ukrainians in their struggle for freedom. “I would very much like to help, but now there’s so much work at the Liberty Sculpture Park,” he says. “If I fly to Ukraine, maybe my park will be destroyed.”

With the support of the New York-based Human Rights Foundation, Mr. Chen hopes to unveil a recreation of the destroyed “CCP Virus” statue in a few months. This one won’t be fiberglass. It will be made of steel.